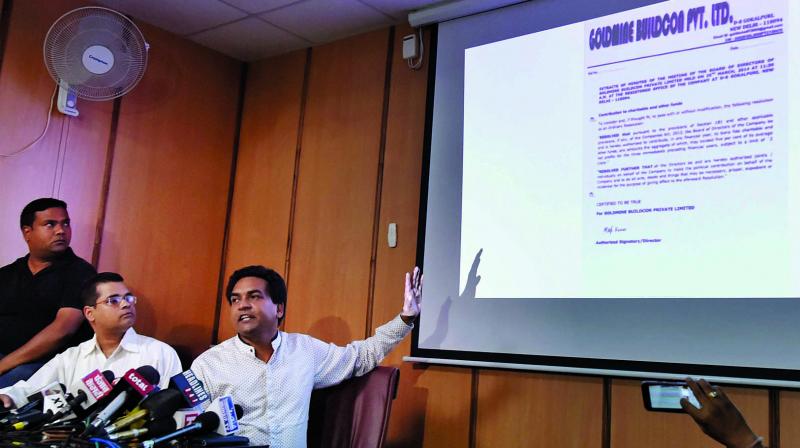 Mr Mishra, who has been suspended from the AAP, alleged that the party received money from a company of Delhi-based lawyer Rohit Tandon, who has been under radar of the Enforcement Directorate over alleged money laundering after demonetisation. “Why did he (Mr Kejriwal) fiercely oppose demonetisation? Because his men, who hoard black money, were being raided by enforcement agencies. His collars are in my hands and he will surely land in Tihar Jail,” he said.

Senior AAP leader Sanjay Singh rubbished the charges saying the donations in question, received in the form of four cheques of Rs 50 lakh each, came through “proper banking channels”. “It has been two years. Why have the probe agencies failed to unearth the wrongdoings?” Mr Singh said. These donations had found an oblique mention in Prime Minister Narendra Modi’s speech during the 2015 Delhi Assembly election campaign.

Earlier on Thursday, a East Delhi-based businessman Mukesh Kumar had claimed that it was he who donated the amount through four of “his companies registered in Delhi”. But in his Friday press conference, Mr Mishra claimed that Mr Kumar was not even director in two of the four companies, which he claimed were “shell entities.”

Goldmine Buildcon Pvt Ltd, Infolance Software Solution Ltd, Skyline Metal and Alloys Pvt Ltd, and Sunvision Agencies Pvt Ltd are the companies in question, according to Neil Terrance Haslam, a self-proclaimed whistleblower who has been assisting the rebel AAP leader in framing the allegations.

Mr Mishra wondered how the AAP accepted donations from Mr Kumar when one of his companies, SKN Associates, was slapped with a notice by the Delhi government in December 2013 “for not paying VAT”.

“Ten days before AAP took office in 2013, Mukesh Kumar’s company was slapped a notice by the Delhi government for not paying VAT. And then this person goes on to donate Rs 2 crore to the AAP,” he said.

The sacked Delhi minister also alleged that Mr Kejriwal-led government didn’t act against Mr Kumar for defaulting on VAT after coming to power in 2013.