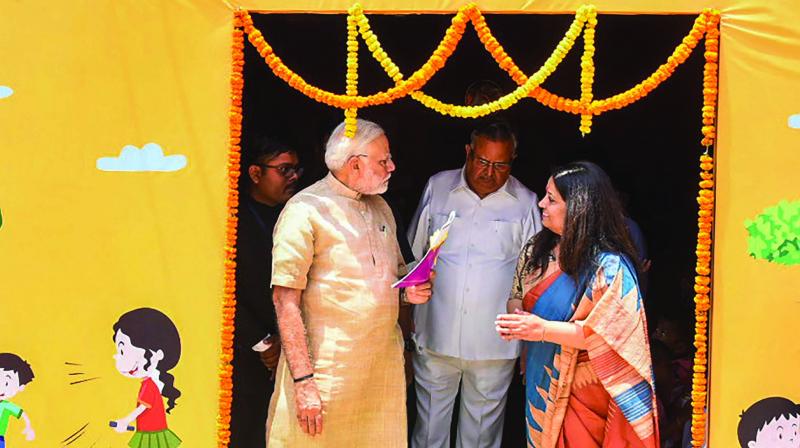 You’re damned if you don’t do, you’re damned if you do. You’re damned either way. Sounds familiar? This is exactly what happened in the health sector in India. When the Central government announced its intention of launching National Health Protection Scheme (NHPS) to protect the poor against the hospitalisation costs, many health experts and policy observers were critical of the government for ignoring the primary healthcare in India. Now when the government has announced an intervention aimed at strengthening primary healthcare in India – as a part of Ayushman Bharat — the experts and observers are again critical of the government. This time for its apparent lack of seriousness as inferred from the tiny budget allocated to the intervention. Little do they appreciate that the time lag between the grounding of an intervention and scaling it up, can be considerable. Indeed, the government has set 2022 as the target year for converting nearly 150,000 Health Sub-centres (HSCs) into Health and Wellness Centres (HWCs) aimed at providing comprehensive primary care in the country. By then, the necessary budgetary resources can be mustered.

The recent inauguration of the first HWC in Bijapur district (in Chhattisgarh) by none other than PM Modi is indicative of the importance his government attaches to this intervention. Further, a careful study of the design of HWCs, which is quite elaborate, does convey the central government’s seriousness.

Each of these centres is to be operated by a well-trained mid-level provider – who could be a nurse practitioner or a community health officer – who will be supported by a team of frontline health workers such as Auxiliary Nurse Midwifes (ANMs), Accredi-ted Social Health Activists (ASHAs), and Multipurpose Workers (MPWs). Remuneration to these workers will be linked to their performance.

The design of HWCs also entails extensive use of information technology for variety of purposes: for clinical decisions, for referrals and follow-up to ensure continuum of care, for monitoring and supervision and so forth. For higher level of care, HWCs will refer patients to Primary Health Centres and Community Health Centres/First Referral Units that will also be strengthened in a phased manner. For the diagnostic services, the design is based on hub-and-spoke model for efficient delivery of such services at different levels of care.

Plans are underway to hire additional workers to populate these centres as well as to train the workforce, the existing and new workers, at scale in delivering expanded package of primary care services.

While the design and the roadmap for HWCs appear all promising, there are at least two key concerns. The first concern relates to achieving synchrony in rolling out different components of the intervention. For example, how to ensure that trained workforce is not sitting idle waiting for the upgradation of HWCs or for the necessary supplies or for the needed funds to run the show? How to ensure that strengthening of HWCs doesn’t happen in ad hoc fashion but respects the principles of efficiency and effectiveness? Unlike many other interventions, health sector interventions are particularly complex. Getting it right in the public sector can’t so easily be assumed. It is an involved activity requiring a clear understanding between the centre and states as well as meticulous planning and careful roll out by states. Getting it right would be an achievement of sorts.

The second concern relates to the governance structure which is responsible for ensuring effectiveness of the primary care intervention once the intervention is in place. What is in the new design that will ensure that the workers will not shirk efforts and indulge in false reporting of data to game the incentive system? Who is to ensure that there is neither any shortage nor excess stock of drugs and other supplies?  Or that drugs received by public health facilities do not get diverted to private market? How the mindset of health administrators at district and block levels, so used to working in a particular fashion, is to be changed and so forth?

Designing of the governance piece is one thing and implementing it is quite another. Effective governance is actually a localized phenomenon in which district and block level administration has an important role. In a different context, where the government is promoting development of 115 “aspirational” districts, the governance issue is dealt with by assigning each identified district two prabhari (in-charge) officers: one from the centre (of no less than the rank of joint secretary) and the other from the state (of no less than the rank of secretary to state). These officers are to work in tandem with the district administration. Some such structure is needed in the primary care intervention too for its effective implementation.

To sum up, the government has got the design elements right in the strengthening of primary healthcare. But setting it up for success requires getting its implementation right too, which calls for a synchrony in its roll out and putting in placing an effective governance structure.

The writer is a development economist, and was formerly with the Bill & Melinda Gates Foundation and the World Bank