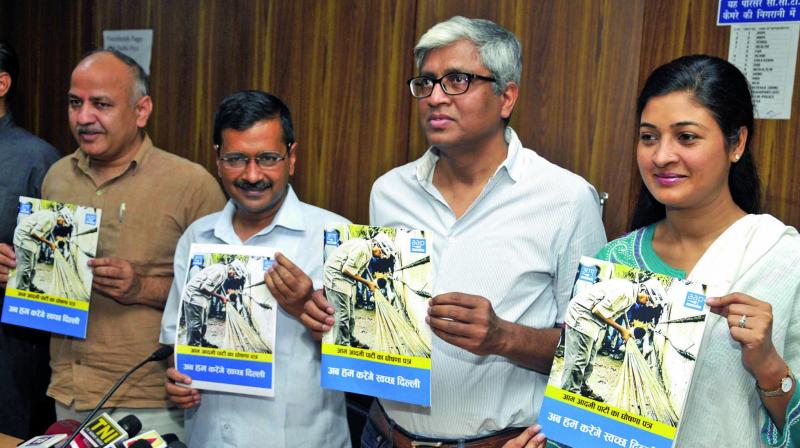 New Delhi: Barely four days ahead of the civic polls in the national capital, chief minister Arvind Kejriwal released the Aam Aadmi Party’s manifesto on Wednesday, pledging to make Delhi free of vector-borne diseases in the next three years, clear the landfill sites by 2019 and put an end to corruption in the three municipal corporations by making the services online.

In a bid to woo about 90,000 sanitation workers in the city, the AAP in its manifesto has assured to disburse their salaries by the seventh of every month and to regularise the contractual labourers. The party’s manifesto has also vowed to give protective gears to the sanitation workers along with a health insurance scheme and Rs 50,000 fixed deposit for their daughters.

Asserting that the switch to online services has been helpful in curbing corruption in his government departments, Mr Kejriwal said that once voted to power, several services rendered by the municipal bodies will be made available online to reduce corruption and a common redressal helpline number will also be launched.

Extending his government’s model to improve the healthcare and education infrastructure of the three corporations, Mr Kejriwal has promised to provide free treatment and medicines in the MCD-run hospitals and healthcare facilities and improve their quality. In the education sector, he announced that the quality of teaching would be enhanced and nursery and KG classes in the MCD-run schools would be started. These annou-ncements mirror the AAP’s promises made during the Delhi Assembly polls.

The party is leaving no stone unturned to woo different sections of the society — from sanitation workers to traders, a strategy which had worked well for the party in the Asse-mbly polls. The MCD polls will be a litmus test for the AAP in Delhi, following the party’s poor show in Goa and Punjab Assembly polls and its defeat in the recent Rajouri Garden bypoll, where the party candidate could not save his deposit.

Berating the BJP-led MCDs for its “10 years of misrule”, Mr Kejriwal said the party which cannot ta-ke care of the city’s garbage is “incapable” of ruling the national capital. “These BJP people have even backstabbed their own Prime Minister (Narendra Modi) despite his call for Swachchh Bharat Abhiyan. Solving problems of Delhi is not their cup of tea. We will fix all these issues. The Delhi government has put an end to water, education, health mafia. We will replicate that by dealing a heavy blow to mafias operating in the MCDs,” he said.

To end parking woes in the city, Mr Kejriwal said the issue will be addressed through surface, multi-lev-el and underground parking facilities. Mr Kejriwal said steps would be taken to tackle the menace of stray dogs and monkeys. The pa-rty had earlier announced abolition of house tax, a promise the AAP feels will be an important agenda in the civic polls.

On those lines, the party will straighten rules so that people can make minor changes in their residence without approaching the MCD officials. Those who have already made such amendments will be regularised under a scheme.

The election to East, North and South Municipal Corporations will be held on April 23. Among the major contenders, the AAP is the last to release its manifesto.