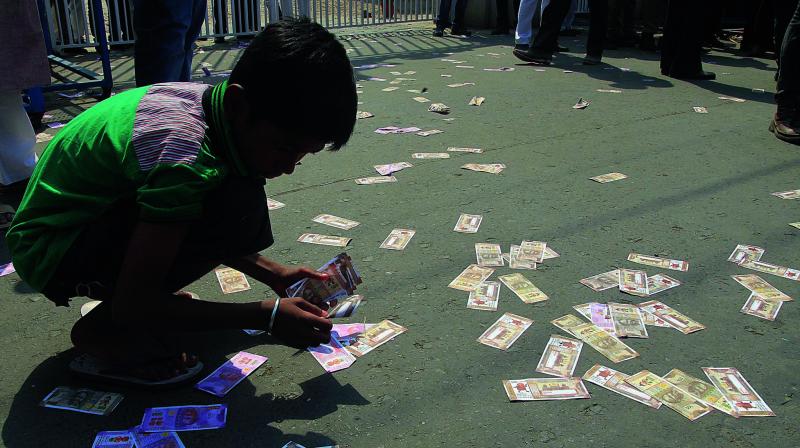 A boy collects fake currency notes during a demonstration in Kolkata on Saturday against the West Bengal government, demanding the arrest of the accused in Narada sting operation. (Photo: Asian Age)

Kolkata: The Central Bureau of Investigation (CBI) on Sunday questioned three petitioners, who moved the Calcutta high court seeking a probe by the Central agency into the Narada sting operation, in which several top Trinamul Congress leaders were allegedly shown accepting cash.

Amitabha Chakraborty, the state Congress leader, Brajesh Jha, a state BJP leader and Akshay Sarengi appeared before the CBI’s anti corruption branch (ACB) office at Nizam Palace in the morning after getting the summons from the Central agency on Saturday.

They were allowed to go in the afternoon following the recording of their statements by the ACB officers into how they came to know about the sting and why they filed the public interest litigations (PIL) at the high court.

Mr Jha, who was first among the three to be allowed to go, told the media that he had lodged a complaint against Trinamul leaders at the Shyampukur police station in North Kolkata after the sting footages were aired on various news channels before the Assembly Elections last year in the state. “But no action was taken by the police into my complaint. This promoted me to move the high court. This is what I told the CBI officers who also showed me various video clippings of the sting operation,” Mr Jha said. He added, “It is significant that it was Mamata Banerjee who had resigned as the railway minister and quit the then NDA government in protest when former BJP leader Bangaru Laxman was caught accepting cash in a sting operation. Now she is the chief minister of our state but she remained silent when the allegations surfaced against her party leaders.” Mr Chakraborty later said, “The CBI officers showed me many footages of the sting operation which were not shown on TV channels earlier. I told them I did not see them before as I came across only those footages which were aired on TV based on which I had filed the PIL because the allegations were against the leaders of a political party which is in power.”

Meanwhile, a five-member CBI team visited Narada CEO Mathew Samuel’s residence at Dwarka in New Delhi at around 11.30 am and took possession of the devices and documents used in the sting operation in presence of his family members. The devices included the CPU and hard disk of the computer in which the sting videos were edited, according to sources adding that the Kolkata police earlier tried to collect those devices in connection with a separate case but failed as they were kept at a secret location. Mr Samuel, who is now in Kochi for treatment, also replied to a set of 12 questions mailed to him by the CBI as part of the agency’s preliminary enquiry. The CBI’s questionnaire included the purpose behind his sting operation, how the sting operation was conducted and whom he contacted to meet the Trinamul leaders.

On the other hand, the Trinamul may move the Supreme Court on Monday against the high court’s order.