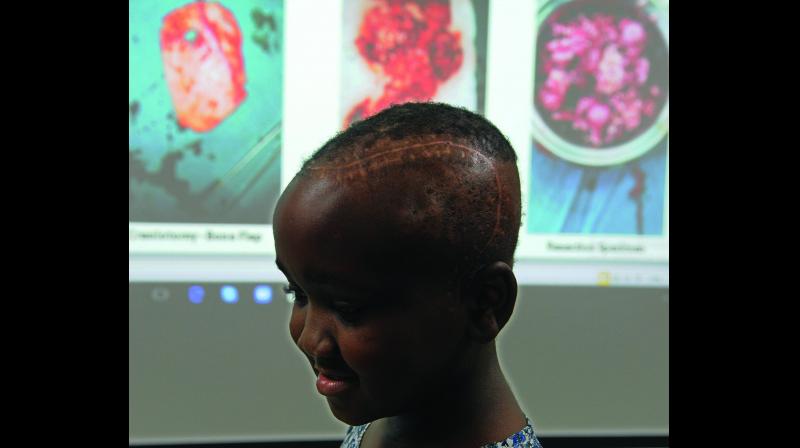 “The patient Joyford Honest John, was admitted to the hospital with complaints of recurrent seizures, vomiting, aphasia, urinary incontinence, diminution of vision, and right side weakness of the body.

“Brain tumors are rare in kids specifically and such large size tumors are rarest. In Joyford’s case, this highly vascular tumour presented several risks of surgery including the risk of paralysis of a limb or any other neurological deficit. Excess bleeding during surgery was also a major risk. With a thought-through process, we planned a microscopic resection of the tumor. Surgery was successful and post-operative patient was perfectly fine without any neurological complication, which was a major risk in this case,” said Dr. Anil Kansal.

Doctors said that it was a unique and first of its kind procedure to reconstruct a jaw using 3D Printing technology and the titanium jaw was constructed and implanted onto the patient. Now, it gave him complete control over his mouth, which allowed him to chew food properly after seven years since his jaw was removed due to cancer.

According to doctors, Prabhjeet – a corporate executive and cancer survivor from Faridabad – had been living without right half of his jawbone for more than seven years. It was removed during a surgery along with temporomandibular (TM) joint to cure him of cancer.

Talking about the procedure, head of department, head, neck and breast oncoplasty, Fortis Hospital Vasant Kunj, Dr Mandeep S Malhotra said: “The underlying SLE disease and reconstruction of the TM joint discouraged us from planning the conventional methodology of using the one’s own lower leg bone in form of Fibula to reconstruct the jawbone. With SLE it was difficult to establish blood supply to the fibula bone, this method also involved losing a bone in the leg which cannot be compensated.”