‘Polls not to elect PM, but to oust dictatorial BJP regime’ 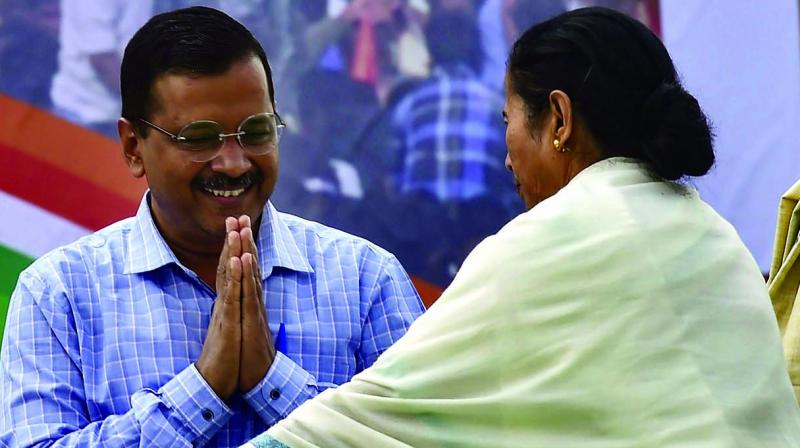 New delhi: Accusing the Narendra Modi and Amit Shah pair of planting hatred in the country, AAP chief Arvind Kejriwal on Saturday said the 2019 Lok Sabha elections will not be for electing a new Prime Min-ister, but to remove the dictatorial BJP regime.

Addressing the “United India Rally” organised by Trinamul chief Mamata Banerjee, the chief minister also said those who really think about the nation and consider themselves a true Indian should vote to remove the Modi-Shah pair.

“Many people ask me who will become the Prime Minister, if not Mr Modi. I want to tell you all, the 2019 elections will be not to elect a Prime Minister, but to remove the Modi-Shah regime,” the AAP supremo said.

Mr Kejriwal also remarked that the people whom Prime Minister Mr Modi follows on Twitter hurl abuses at women. Accusing the ruling pair of planting hatred in the country, Mr Kejriwal also said that the BJP leaders have done in five years what Pakistan could not do in 70.

He also said that they have spoiled the nation under their rule.

“The youth of the nation is unhappy. They voted for Mr Modi as he promised employment to them. Instead of giving jobs, Mr Modi brought demonetisation, which reduced 1.25 crore jobs in the country,” he said, adding that women, farmers, Dalits and Muslims too were unhappy with Mr Modi. “The dalits and Muslims are being lynched,” he added.

The AAP leader said: “We are gathered here with a dream to remove the Modi-Shah pair from Delhi. Now I can go back with this one peace that the country will have good days in real sense and will remove them from power.”

Recalling how Adolf Hitler had changed the rule in Germany to stay in power until the end of his life, Kejriwal said: “The Modi-Shah pair is the biggest threat to the country.”