The students alleged that over 10 students, including the visually and physically challenged, were injured due to the “brutality” of police personnel. 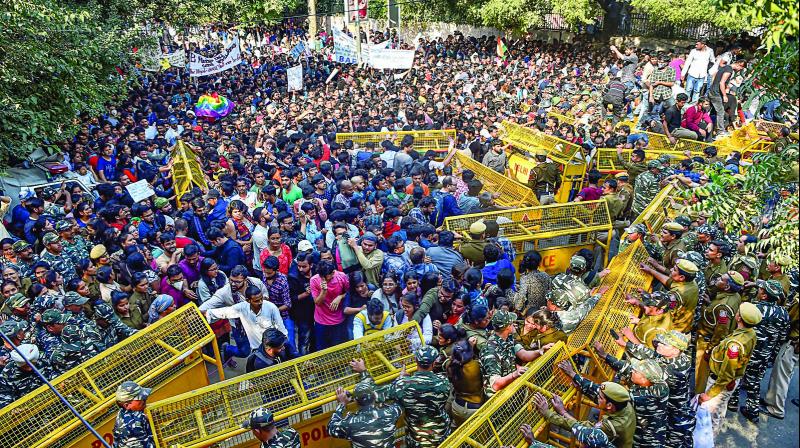 Jawaharlal Nehru University students try to get past police barricades during a protest march towards Parliament in New Delhi on Monday. (Photo: PTI)

NEW DELHI: Around 100 students of JNU including the students’ union president and other office-bearers were detained and some were injured when the Delhi Police allegedly lathicharged and stopped them at many places as hundreds of protesters marched towards the Parliament on the first day of the Winter Session on Monday demanding a total rollback of the hostel fee hike.

The students alleged that over 10 students, including the visually and physically challenged, were injured due to the “brutality” of police personnel.

The students, who were holding a protest on the university’s premises for the past three weeks, hit the streets carrying placards and chanting slogans, seeking to get the attention of the Parliament about their demand. They asserted that they will not relent until the government withdrew the fee hike.

The protesting students sat on the road outside Safdurjung Tomb demanding the release of those detained and a meeting with officials of the HRD ministry. The top brass of Delhi Police tried to initiate a dialogue with them and urged them to not take law into their hands.

“The protest ended at around 7:30 pm and the protesting students returned peacefully and now the situation is normal,” said Jt. CP (Southern range) Devesh Chandra Srivastava.

Traffic was affected in some parts of Lutyens’ Delhi as the students marched towards Parliament. The police resorted to “lathicharge” to disperse them in which several students sustained injuries.

JNUSU president Aishe Gosh said they took out a peaceful march from JNU. “The police thought they would detain two office-bearers and the movement would end, but every student is a leader. We are all fighting together. The Delhi Police is upset. Till the time there is not a complete rollback of the hike and of the IHA manual, we will continue our agitation.” She also asked why male police personnel were detaining women students.

Section-144 was imposed outside the JNU campus on Monday morning ahead of the protest. Around 800 Delhi Police personnels and 10 companies of Central Armed Police Force (CAPF) were deployed. Further the students were stopped on Baba Ganganath Marg, around 600 metres from the main gate of the university.

“After protracted persuasive tactics and the general approach of physical containment by Delhi Police, the students mostly seemed convinced, but a group of them suddenly broke away and somehow managed to proceed towards the New Delhi area through the Aurobindo Marg. They were effectively stopped and contained at Safdarjung Tomb. However, some agitated groups still attempted to forcibly break the barricades again, and had to be pushed back by the police. Around 100 students were detained for showing aggressive defiance to the directions of the police,” Delhi Police PRO said.

"The Delhi Police staff acted with restraint all along and despite continued defiance by some groups of students, methods of persuasion were resorted to, and there was no use of water cannons, tear gas shells or lathicharge at any stage of the protest,” the police official said.

Delhi Metro on Monday closed entry and exit points of three stations near Parliament for few hours due to the ongoing JNU protest.