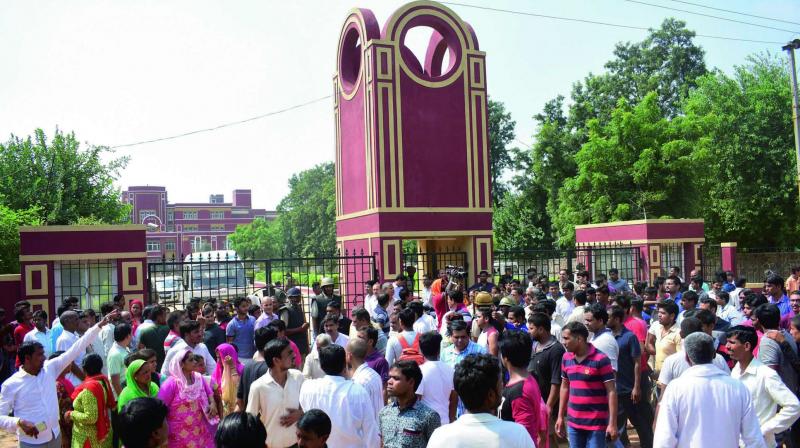 Students arrive at Gurgaon’s Ryan International School which re-opened on Monday after 10 days closure following the murder of an eight-year-old boy. (Photo: PTI)

New Delhi: The Ryan International School in Gurgaon will remained closed till September 25 as the family of seven-year-old Pradhuman Thakur, who was brutally killed on its campus, raised apprehensions about vital evidence being destroyed.

The school was opened to thin attendance on Monday, but following the victim’s father’s objections, the district administration decided to close it till Monday next week.

Meanwhile, the Gurgaon police team probing the Pradhuman case was at the backfoot in a local court over weak investigation even as the three arrested accused in the case were sent to judicial custody till September 29.

The victim’s father Barun Thakur strongly held that the school should not be opened till the CBI takes over the case. “The district administration has reopened the school and suppose if any kind of evidence is still intact inside, that could be destroyed by the perpetrator. I strongly object to the decision of the district administration and have written to the Prime Minister’s Office (PMO) seeking its intervention,” Mr Thakur said. He had earlier written an email to deputy commissioner (DC) Vinay Pratap Singh asking him to rethink the decision.

Following the family’s assertion, the DC decided to close the school till September 25.

“We reopened the school after 10 days but as the family of Pradhuman had strong objections, we have decided to close the school to address their concerns and also take other safety measures,” DC Singh said.

Mr Singh was appointed as the new administrator of the school by the Haryana government.

“The entire crime scene — the washroom of the school and some other parts — has been sanitised. No evidence will be destroyed,” Mr Singh said.

The school opened on Monday, but only 250 students came against a strength of 1200  as many parents did not send their ward to the school fearing their security.

There were only four students to mark their presence inside the classroom where Pradyuman had been a student. The parents of two students, who came along with their wards, told the school management that they wanted to quit the school fearing insecurity in the school premises.

The parents of one of Pradyuman’s classmates said that his children were scared to go to the school toilet.

“We want to cancel the admission of our wards. We don’t want our children to meet with any mishap. I know I will have problem in finding another school for my children, but I want him to be safe,” said a man, who came to drop his son at the school.

The police also had a meeting with the parents of the students to discuss the issues concerning security in the school premises. A parent-teacher meeting will also be held in the coming weeks. Mr Singh will also look after the accounts of the school for the next three months.

Pradyuman’s father, Varun Chandra Thakur, said that the school should have waited for the CBI investigation to be over, as evidence might be lost.