Mukherjee Nagar auto driver under scanner for violent past 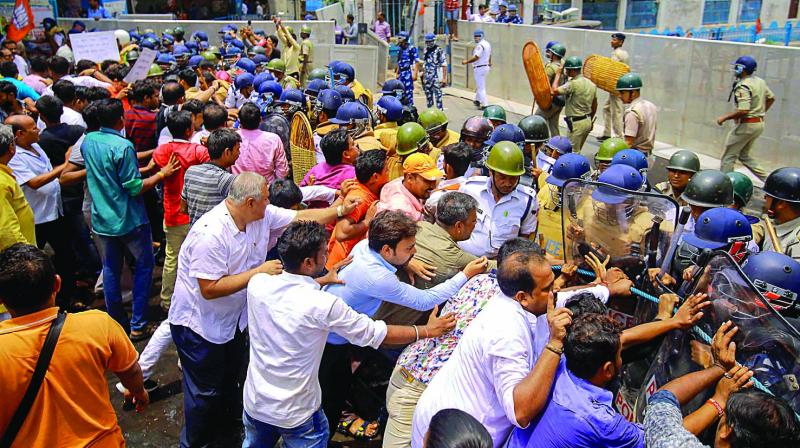 The incident has instigated a communal angle and turned into a political battle which held hostage the entire area for last 48 hours. (Photo: PTI)

NEW DELHI: The Sikh auto driver who got sympathy of being a victim of police brutality, has now himself come under the scanner as the haunting past of his violent activities have been emerged. He was earlier booked in a case of physical fisticuff with a sewadar at Bangla Sahib Gurudwara in April this year. He was also booked for breach of peace and tranquility of an area under preventive sanctions (CrPc 107/151) in 2006, 2011, and 2013 by the Delhi police.

Shockingly, his minor son was also present there during the physical fisticuff at the Gurudwara. His son has also been named as he tried to mow down police personnel of Mukherjee Nagar on Sunday. The incident has instigated a communal angle and turned into a political battle which held hostage the entire area for last 48 hours.

On Tuesday, Delhi police commissioner Amulya Patnaik met Union home secretary Rajiv Gauba and submitted a report on the entire incident. The report is believed to have mentioned about registration of the two FIRs — one on a complaint by the tempo driver and the other by a policeman who was injured in the incident. The cop got a 7 cm gash on his head in the alleged attack by the driver. It also mentions the action taken against three police personnel for their “unprofessional conduct” and their subsequent suspension. Meanwhile, the report praised a policeman, who was in civilian clothes, for his attempt to control the situation.

According to Sarabjeet’s neighbours in Sant Nagar near Burari, he lives with his minor son, who has also been named in the FIR, and Sarabjeet was separated from his wife longtime ago. Police have lodged cross FIR’s and transferred it to Crime Branch which will “independently” probe the two cross FIRs registered based on the statement of the police personnel and the tempo driver.

A senior crime branch official said they are yet to receive the files. But the officials have already scanned through four-five CCTV footages of the incident apart from the recorded videos that went viral soon after the incident. The videos of the incident which went viral will be scanned thoroughly to establish the exact sequence of event and the statements of all those seen in the video will also be taken.

Police have even identified some of the onlookers who will be questioned in connection with the incident to understand the cause of the alleged incident. Statements of the police personnel and the tempo driver, Sarabjeet Singh will also be taken.