“It was like parting with my own child,” the passionate vintage car aficionado said. 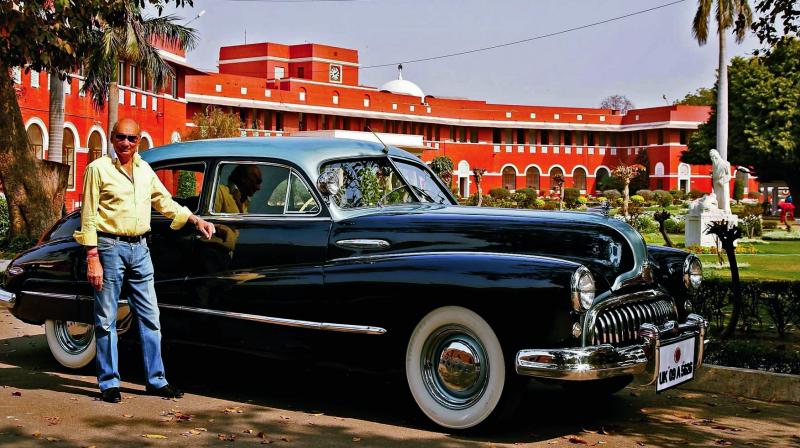 Manujendra Shah of the erstwhile princely state of Tehri-Garhwal is seen with a 1947 Buick in New Delhi. The vintage car was recently sold by him. (Photo: PTI)

“It was like parting with my own child,” the passionate vintage car aficionado said.

He earlier counted an impressive fleet of Cadillac cars, among his envious collection but unable to maintain these “fabulous machines”, he shed his “family’s jewels”.

“By 1990s, I had about 10 vintage cars at my garage in our family mansion in Delhi, but now just about four are left, including a 1951 Cadillac, which is a two-door convertible and a red Triumph Herald, a two-door coupe.

“I had restored and nurtured them, because they need love and care, just the way a child does. Selling the Buick, and other old cars was too painful an experience. I still see some of them in car rallies, but it breaks my heart to be recalled that they are not mine anymore,” he told PTI.

While Mr Shah, whose cars have participated in major vintage car events in the country, takes consolation in the fact that his vehicles have ended up with collectors, many owners have sold them for scrap, finding their upkeep “unfeasible”. Madan Mohan, organiser of ‘21 Gun Salute International Vintage Car Rally & Concours Show’ held annually in Delhi and Greater Noida, says these cars need to be driven regularly to be kept in shape, otherwise they will rust out.

“Vintage car owners and collectors take great care in maintaining these vehicles, which are automobile treasures of the country, our heritage. And, if authorities do not allow them to plied on the streets, they will either turn into junk, lying in the garage, or worse be sold for scrap as many of them have already been,” he rued.

“Just keeping them as showpieces in rallies or putting them in museum, would amount to depriving the posterity of a priceless heritage of our country. And, even for rallies, we have to take permission from court,” Mohan said. The National Green Tribunal in a November 26, 2014 order had banned from Delhi roads cars which were over 15 years old, thus disqualifying vintage cars from participating in any rally.

Mohan, founder trustee of the 21 Gun Salute Heritage and Cultural Trust, which hosts the rally, had to file a plea in the NGT to get an exemption for holding the event this year and its previous two editions.

Nearly 75 spectacular vintage and classic cars from India, including ‘Maharaja’ cars; 15 cars and 25 bikes, sourced from finest collectors from around the world, were put on display during the event held this February.