The protest began at around 12 noon with the protesters raising slogans against the new law as well as the National Register of Citizens (NRC). 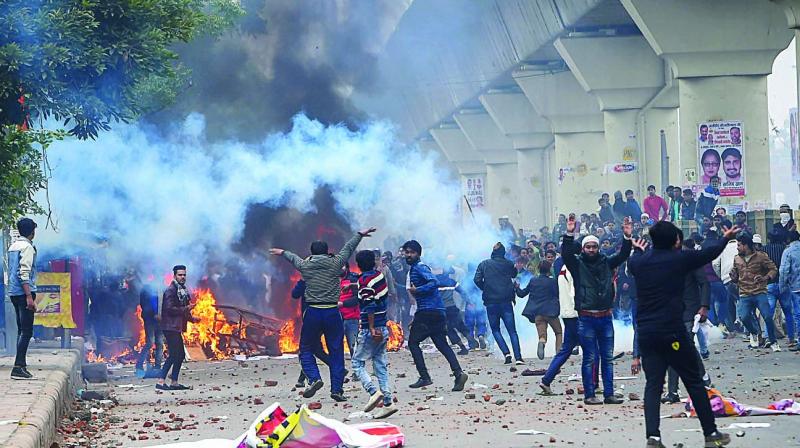 Brickbats lie on a road as protestors against Citizenship Amendment Act clash with police at Seelampur in New Delhi on Tuesday. (Photo: AP, PTI)

New Delhi: The national capital once again witnessed violence over the controversial Citizenship Amendment Act with massive rioting taking place in northeast Delhi’s Seelampur area. Angry protesters demanding scrapping of the CAA torched several motorbikes, pelted stones at police personnel and damaged buses, including a school bus, and two police booths. About 21 people, including 12 police personnel, were injured in the incident. Gates of seven Metro stations were closed in the wake of the protest, and five of them were reopened after some time.

The violence reportedly began at about 2 pm when a crowd marching in protest against the CAA was stopped by the police from moving forward at the Seelampur Chowk. The situation soon took an ugly turn when the crowd started throwing stones at the police personnel. The police retaliated by resorting to baton charge and firing tear gas shells to disperse the protesters.

Plumes of smoke billowed from at least two localities as the standoff continued for around one-and-a-half hours. Two bikes of traffic cops were also burnt by the demonstrators, who vandalised two local police booths and took away the CCTV cameras installed in them. The protesters also pelted stones on a school bus carrying children. Many children who got stranded in their schools were rescued by the cops.

The protest began at around 12 noon with the protesters raising slogans against the new law as well as the National Register of Citizens (NRC). Imtiyaz Ahmed, a protestor, said: “We had come here to raise our voice against CAA and NRC. I got injuries on my right leg during the police attack.”

Local residents were seen holding discussions with senior police officers and mosques were heard making appeals via loudspeaker asking people to maintain peace and remain calm. Delhi lieutenant-governor Anil Baijal also appealed to the citizens to maintain peace and to keep themselves away from violence.

Chief Minister Arvind Kejriwal said violence cannot be tolerated in a civilised society. The Aam Aadmi Party and its Seelampur MLA Haji Ishraq urged the people to register their protest peacefully after the area witnessed violence. “I am appealing all the people to register protest and convey their message peacefully,” Mr Ishraq said in a video message. He urged locals and youngsters not to venture out on the main roads of the area to protest.

Later in the evening, the police detained five persons and lodged two FIRs at Zafrabad and Seelampur police stations regarding the violence. The Seelampur clashes erupted two days after violence broke out during a protest in the New Friends Colony area near Jamia Millia Islamia University in south Delhi.