Coronation pillar to mark shifting of capital in 1911 stands defaced 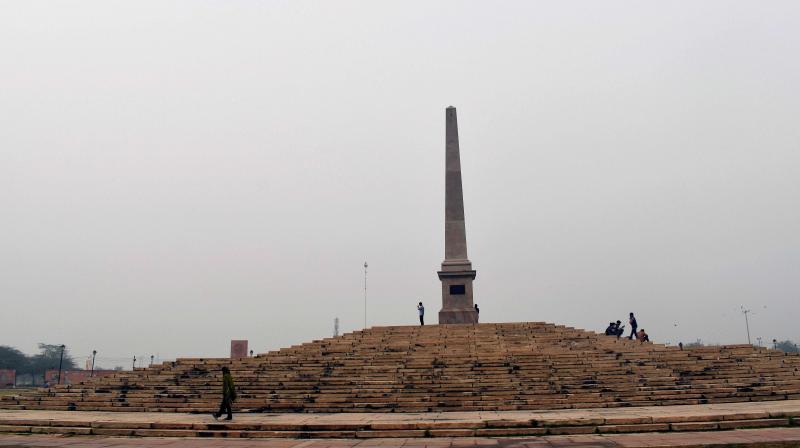 A man walks past the coronation pillar to mark the 1911 Delhi Durbar where King George V announced shifting of capital from Calcutta to New Delhi. (Photo: PTI)

New Delhi: A monument that marks the Coronation Durbar held in Delhi in 1911 wears a defaced look today, while a centre that was to showcase the city’s history on its ground is yet to see the light of day.

On December 12, 106 years ago, at this very imperial gathering, British monarch King George V had announced the shifting of India’s capital from Calcutta to Delhi.

The ground is now part of the Coronation Park, located in Burari near Kingsway Camp, a name that harks back to the regal assembly, which had turned the area into a royal tent city, memories of which have survived in old monochrome and sepia-toned images and grainy footage.

In the 1911 Delhi Durbar, King George V and Queen Mary were coronated as the Emperor and Empress of India and signalled the birth of a new imperial capital.

The heritage site, owned by the Delhi Development Authority (DDA), saw decades of neglect, until it was taken up by the former chief minister Sheila Dikshit to be redeveloped as a Coronation Park. Work was to be completed by 2011, to coincide with the 100th anniversary.

But the DDA, after missing several deadlines, has only managed to landscape the area, even though the grass has lost its sheen, while the history walls erected in front of the four statues of Viceroys, lie incomplete and defaced.

“It just has been lying underutilised. And any place that lies in such a condition ends up being subjected to defacement,” said the convener of heritage body Indian National Trust for Art and Cultural Heritage (INTACH), Delhi, Swapna Liddle.

Ms Liddle, who recently led a heritage walk at the park, said she had seen the pillar and the walls being scribbled with graffiti.

“It of course means we need to impart more eduction to our youth, who think by scrawling their names on public structures they are achieving something,” Ms Liddle said.

History records that on this ground, two other Delhi Durbars were held — in 1877 and 1903 — “both also filled with grandeur and splendour, the royal tents and the other paraphernalia,” she said.

“The durbars also celebrated art, craftsmanship, photography and films. The ‘Interpretation Centre’ can tell a fascinating tale,” she said.

The ‘Interpretation Centre’ is part of the redevelopment plan. The building is ready, but the centre, showcasing Delhi’s history, is yet to come up.

A senior DDA official, when contacted, said, “I am not aware of the status of the redevelopment project.” But the official declined to comment on the defacement.

On the anniversary day, there was little to remind the people of the city’s history. A group of boys played cricket near the Coronation Pillar, as decaying marble statues of King George V and four Viceroys looked stonily on.

Local residents, oblivious of the importance of the place, or that it was the 106th anniversary of New Delhi, strolled in the park.

“I came here today for the first time, but had no idea about the historic value of this place. We haven’t been taught about the place,” said Nikhil of Class 10.

Ms Liddle said one possible reason for the neglect of such British-era landmarks was the sentiment against the Raj.

“It is, after all, the birthplace of New Delhi. We all should celebrate it for that reason alone,” Ms Liddle said.