New JNUSU president says he was attacked by ABVP. 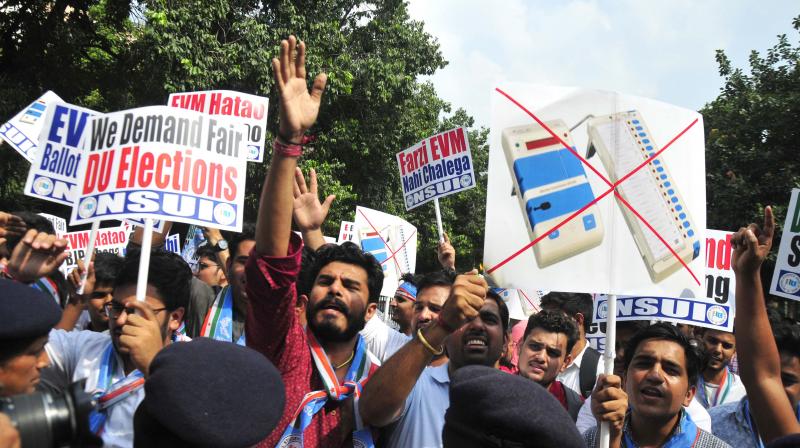 New Delhi: Members of the RSS-affiliated ABVP and the Left-backed AISA clashed early Monday, hours after the JNU Students’ Union (JNUSU) poll results were announced. Both the groups accused each other of attacking their supporters.

While the All-India Students’ Association (AISA) alleged that the Akhil Bharatiya Vidyarthi Parishad (ABVP) members randomly attacked students, with a former student being almost “lynched” and the new JNUSU president being beaten up, the RSS-affiliate claimed its activists were attacked by Left supporters and three were injured.

Violence erupted on the JNU campus after a united front of Left student groups Sunday won all four central panel posts in the union defeating the ABVP by considerable margins.

Newly-elected JNUSU president N. Sai Balaji alleged that he was beaten up in the early hours of Monday by ABVP activists.

“Today, ABVP students randomly attacked students. I was called to the scene at Sutlej (hostel). As the elected JNUSU president, I went to ensure the safety of a student who was attacked by ABVP students with sticks. What I saw there was mayhem. The mob, led by ABVP members, was baying for the blood of any student they thought was a friend of the student they were attacking,” Mr Balaji said.

This is the second incident of the two groups clashing on campus in the last three days, the last being on Saturday ahead of the counting, which was suspended after election authorities cited forcible entry and attempt to snatch away ballot boxes.

“The group turned into a mob and started attacking a former JNU student in the Jhelum Hostel and chased him. They almost lynched him in the lawns. I ran with the other students to save him. He had fallen unconscious after the beating and we took him to an ambulance,” he said.

He said that some students asked him to sit inside a police control room (PCR) van after the situation got out of control.

He also claimed that ABVP members “openly threatened him, along with former JNUSU president Geeta Kumari and other students present there, with dire consequences if they intervened and tried to stop the violence.”

However, the ABVP claimed that their members were roughed up by AISA activists.

“Three JNU students affiliated to the ABVP were attacked by criminals hiding as champions of the Communist ideology,” the ABVP said.

It alleged that the Left workers entered the room of a student and hit him with sticks and punched him. Two others were also injured, the ABVP claimed.

The ABVP and the AISA have both filed complaints against each other at the Vasant Kunj police station. DCP (Southwest) Devender Arya said the situation is under control.