Sea of people at Vajpayee funeral 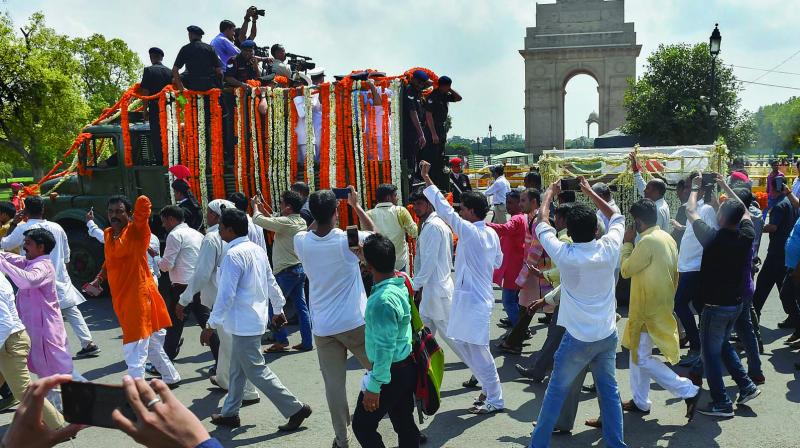 People walk along the convoy carrying the mortal remains of former Prime Minister Atal Behari Vajpayee as it passes in front of the India Gate in New Delhi on Friday. (Photo: PTI)

New Delhi: For Delhites, on Thursday, all roads led to Deen Dayal Upadhyaya Marg and Smriti Sthal. Despite the heat and humidity, people from across the city converged on these stretches to catch the last glimpse of India’s political icon, Atal Behari Vajpayee.

Cutting across communities, people from all section of society gathered along the stretch. They clambered on the trees and climbed the poles to capture the moment on their phones and preserve the last memories of the leader, whose appeal transcends beyond the political lines. Slogans-as Atalji amar rahen, Jab tak sooraj chand rahega, Atalji ka naam rahega” rent the air.

People even carried posters of the former Prime Minister with quotes from the poems he wrote.

Anticipating a large crowd of people, tight security arrangements were put in place along the route. Nearly 20,000 security personnel were pressed into operation.

One of Vajpayee’s admirers had come all the way from Uttarakhand.

“I met Vajpayee Ji in 1984 when he visited Uttarkashi en route to Gangotri. He visited the town once again in 1986,” he said, showing a photograph where he was standing beside the former Prime Minister.

Shivshakti Singh, 23,, who is a civil services aspirant, said that he was  impressed by former Prime Minister Vajpayee’s personality.

“He led India and made it a nuclear state in the face of opposition from the United States. His statesmanship and poetic skills were impressive,” he said.