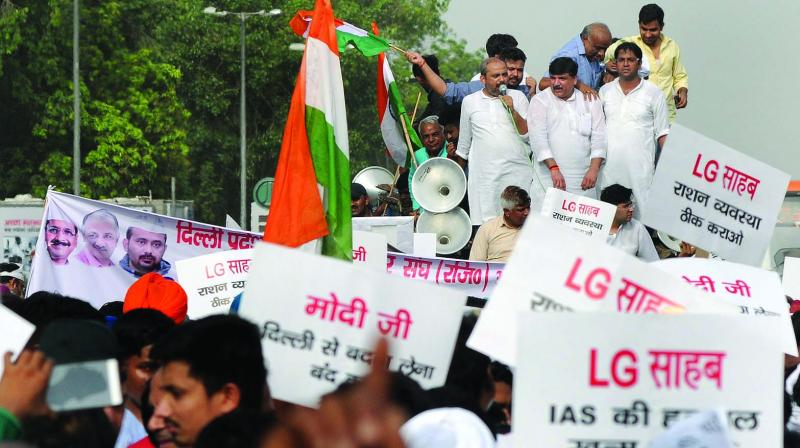 Amid the ongoing sit-in by party supremo and Delhi CM Arvind Kejriwal and his two Cabinet colleagues at the lieutenant governor’s office, the AAP leaders and workers began the march from Mandi House, but were stopped at Parliament Street police station.

The march threw traffic out of gear for over three hours on Sunday.

The most affected areas were Connaught Place circle, KG Marg, Parliament Street, Barakahmba Road, and Mandi House. Even the India Gate C-Hexagon could not escape from the clutches of traffic.

Sporting almost all the key party faces, including those of its Rajya Sabha member Sanjay Singh and Kejriwal’s Cabinet colleagues Kailash Gahlot and Rajendra Pal Gautam, the AAP march lasted for over two hours, with the party spokesperson Saurabh Bhardwaj claiming a participation of over 45,000 people.

The march concluded peacefully without any untoward incident amid the AAP workers and leaders lambasting Prime Minister Narendra Modi and L-G Anil Baijal over a host of issues including the demand of full statehood for Delhi and condemnation of IAS officers’ “strike”.

In a tweet during the march, Mr Kejriwal said the people were feeling “hurt and humiliated” and asked PM Narendra Modi to allow Delhi government to work.

“Sir, not only Delhi, but the entire country is appealing you — please allow the elected government to work and get these IAS officers strike to end. People are feeling hurt and humiliated,” he tweeted.

The police said that the AAP did not seek any permission for its march to the PM’s residence even as party leaders alleged that supporters were being prevented from taking part in the rally.