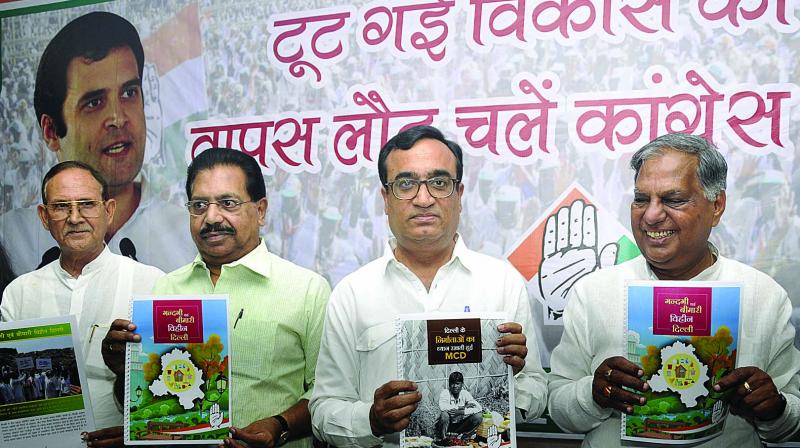 New Delhi: In a departure from its tradition, Delhi Congress on Monday released a four-part manifesto for the upcoming civic polls with a special focus on the urban poor, health and education reforms, sanitation and financial health of municipal corporations.

In the coming two days, the party will come out with separate manifestos for the urban infrastructure and youths.

Delhi Congress president Ajay Maken said that the party will establish an urban poverty alleviation department if voted to power in the municipal elections. “The department will act as a hub through which the Central and state government’s social welfare policies would be channelled to facilitate the labourers working in unorganised sectors so that they can avail the benefits of policies like Rashtriya Swasthya Vima Yojana, Pradhan Mantri Jeevan Jyoti Veema Yojana, etc,” he said.

Health and accidental insurance cover and other benefits will be provided to the unorganised sector workers including domestic helps, the Delhi Congress chief said. The corporate houses will be encouraged to spend a share of their CSR fund on poverty alleviation, he added. Congress, in its MCD poll manifesto, promised to provide unemployment allowance and regularisation of contractual sanitation workers. No new taxes will be imposed and the existing house tax rates could be lowered by eliminating “corruption.”

Five lakh street vendors will be registered and provided with licences, the manifesto promises. It talks of regularisation and development of unauthorised colonies. “Congress-ruled MCD will earmark Rs 2,000 crore as development fund for the unauthorised and resettlement colonies,” Mr Maken said. The JJ clusters will be developed through in-situ rehabilitation, he added.

The roadmaps for primary health and education, outlined a complete overhaul of the existing systems in corporations, which includes setting up of an ‘empowered group for quality education’ to monitor schools and augmentation and upgradation of primary health clinics. Congress claimed that it will make Delhi a “cent per cent sanitised city, with zero landfill sites and fully integrated solid waste management system.

“We are not making hollow promises as Bharatiya Janata Party did in its manifesto. It ruled corporations for 10 years and failed even to pay timely salaries to the sanitation workers and teachers of civic schools. How do they plan to fulfil tall promises made by them?” Mr Maken said.