From sportsman to drug dealer

International discus champion, 2 others held for being part of cartel. 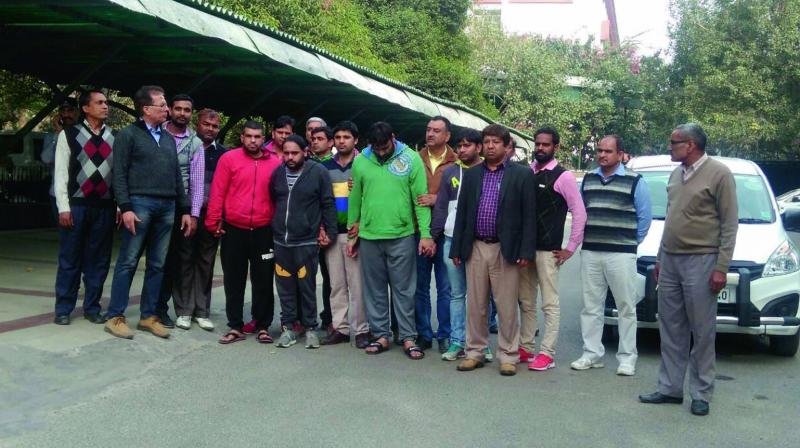 The arrested accused with the police.

New Delhi: In a case that seems straight out of the film Udta Punjab, the Delhi police special cell has arrested an international-level discus player and two others on charges of smuggling over 25 kg of contraband, specifically mephedrone, also known as Meow Meow. The seizure was worth Rs 50 crore.

Arrested accused Amandeep Singh, 29, who was pursuing his diploma in Hospitality and Tourism in London, met drug kingpin Kishan and was fascinated by his lifestyle. Another accused Harnish Sarpal, 36, a student in London was also initiated into the world of drugs by Kishan. The third accused, however, already had a little bit of a history with drugs. He was disgraced discus throw champion Harpreet Singh, 30. After early successes in 2007, he was charged for doping in Open India Sport Event. Later, he was banned by the Sports Authority of India. His image had been sullied due to the doping charges. From 2006 to 2008 he also played for the ONGC for a stipend. While preparing for Commonwealth Games in 2010, he sustained a foot injury and could not play again. After an unsuccessful stint as a property dealer, Harpreet noticed the sudden change in the lifestyle of Amandeep. He requested him to find him also a similar job. Amandeep, in turn, enrolled him in his gang. Since Harpreet Singh was in dire need of instant money, he agreed and started working as an active associate in the drug supply chain.

The three landed in the police’s net after the team received a tip-off that Amandeep Singh alongwith his associate would soon be flying to Mumbai to collect a consignment of the said contraband and would return to Delhi on the intervening night of February 13 and 14.

“The team who was waiting for the nod finally received a tip-off that Amandeep Singh and his associate were on the Dadar-Amritsar train with the drug consignment and would get off at New Delhi railway station. A trap was laid at all important exit points of New Delhi Railway Station,” said an officer.

Once the three alighted the train, the informer confirmed who they were. But almost as though they sensed police presence, they started running in the opposite direction. “However, after a brief chase, they were arrested,” said Sanjeev Kumar Yadav, DCP Special Cell.

Mr Yadav said that every gang-member had a specific role to play. Investigations reveal that Kailash Rajput, who is presently living in Dubai and Kishan, who is lives in UK are the kingpins.