Manisha has lost her father, mother, and an 18-year-old brother to the terrorist attack. 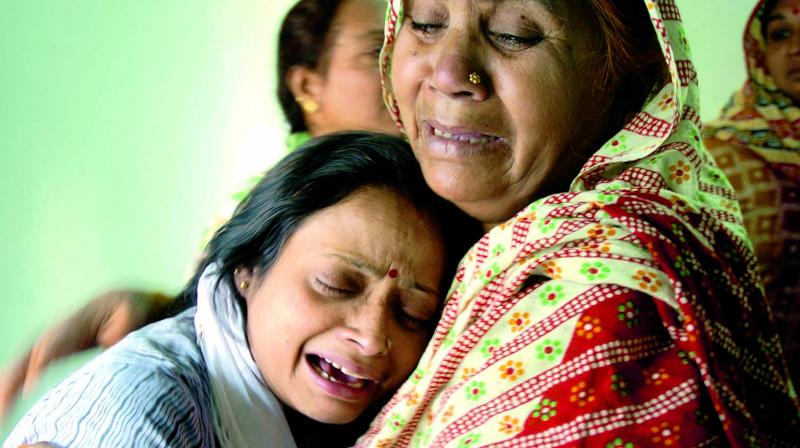 A file photograph shows a woman consoling her relative, the mother of a girl killed October 29 when a blast ripped through the Paharganj area. (Photo: AFP)

New Delhi: A day after the Patiala House courts acquitted the three accused in the Delhi 2005 terror blast case, the news came as a blow to the victims of the pre-Diwali blast which shook the national capital and left trails of devastation in the lives of many.

The chain of explosions, which ripped many households and created havoc in the lives of many, are still fresh in the memories and hearts of the people who lost their sole bread earners and their loved-ones on the eve of October 29. The court’s acquittal just added to their misery and left them hapless. Unable to come to terms with the verdict, Manisha Das, who was just an eight-year-old girl when she lost her parents and brother in the serial blasts, couldn’t hold onto her emotions and broke down in the courtroom.

“The verdict has only served as an insult to our injury. The men, who took away everything I had, were let free by the court. My faith in our judiciary has been shaken to the core as the order stated that the police had failed to collect sufficient evidence against the accused and therefore they are being acquitted,” said the hotel management student who is now a 20-year-old.

“My grandmother, who has still not come to terms with the loss we bore as a family, began crying inconsolably in the court room and pleaded with folded hands not to let the culprits walk free,” Manisha told this correspondent.

“However, the fight to get justice is still on. We will approach the high court and submit a petition in this regard. No matter what, we will continue our fight against the guilty,” she added.

The 20-year-old is unable to forget the faces of the three who walked past her when they were acquitted and waved at her. “The three were smiling and waived hands at all of us when the verdict came out. I don’t feel sorry for what happened with me, but for the system,” she said. Manisha has lost her father, mother, and an 18-year-old brother to the terrorist attack.

A survivor, Kuldeep Singh’s name became synonymous to brave-heart after he saved the lives of over 80 passengers travelling in his DTC bus when he threw away the bomb which went off as a sudden shock.

The blast left him with severe burns. He also lost his eye on the horrendous day. The verdict was as tragic as the incident for him. Kuldeep, who is still grappling with the proble-m in his eye, has been allegedly asked to stay aw-ay from the proceedings.

The distance is not a medical advice; it is a caution from his department. Instead of celebrating his bravado, his heroism is being downplayed. What came as a shock was when Kuldeep was not even granted leave to attend the verdict on Thursday. “It is sad that the court acquitted the three accused. The incident still sends shivers down the spine when we think about it. I hope the judicial system and the police serve us justice,” he said.

While the families of the blast victims have not called it quits yet, Ashok Randhawa, a blast survivor and the voice behind the Sarojini Nagar blast victims, said that the verdict is unfortunate. “I have been fighting the battle with all the others for 12 long years. As the verdict left us in tatters, I am left with nothing but hope that justice will be served. After the verdict, many families of the blast victims vented out their angst at me and said that the way we fought, wasn’t enough. I can relate to their struggle and turmoil. I am not giving up on our system and will take the matter to a higher court,” added Mr Randhawa.

The victims’ families have now formed an association along with Mr Randhawa, the then president of Sarojini Nagar mini market. Within 20 days a fresh appeal will be filed in the higher court in this connection. Determined to seek justice, the victims equivocally said that they are not going to give up. Sarojini Nagar was one of the three locations, besides Govindpuri, and Paharganj, where bombs had been planted.