Highlights of the report will be distributed across the city next month. 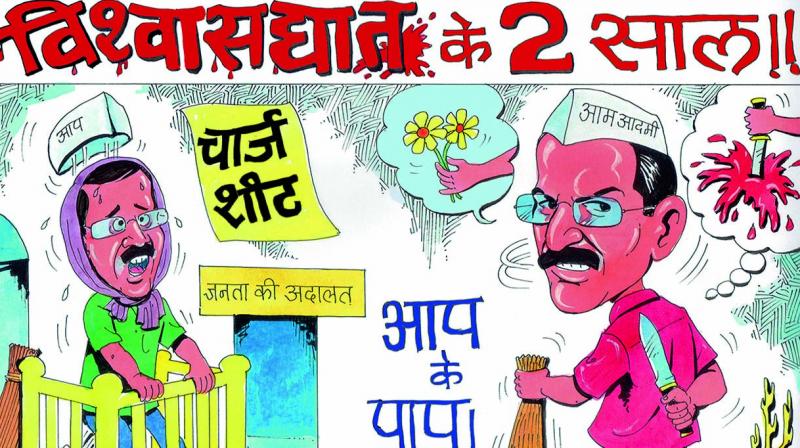 A photograph of the Congress “report card”.

New Delhi: Intensifying its attack against the AAP government in the capital, the Delhi Congress released its own “report card” for the Kejriwal-led government. The AAP government which completed its two years in the national capital this week, has been targeted by its opponents on various issues.

The timing of this report card could have serious repercussions as the city is all set to face a three-way battle in the upcoming civic polls. Since development has been the buzz word for the polls in the recent times, the Delhi Congress alleged that the AAP has side-tracked from the promises it made and failed at the developmental front. The party has focused on people centric issues in the mega report card. The party also announced that Congress vice-president Rahul Gandhi will address a rally at Ramlila Maidan against the Delhi government.

In the 42-page document, that largely focuses on education and health, the Congress claims that contrary to the assertions of ruling AAP, number of students in government schools have come down since 2014.

He said the figures in the report are all taken from official sources such as the “Baseline Data for Vision 2030” or Delhi Statistical Handbook. Mr Maken alleged that the government deliberately removed the data from its website.

“Education is simply a publicity stunt for the AAP. Apart from reduction in students, the board exam results have been the worst in recent years,” he said. Queries to the department’s advisers in this regard elicited to response.

The DPCC head also claimed that the “much-vaunted” mohalla clinics project was a “dud” as it caters to only 0.8 per cent of the total Outpatient Department (OPD) share of the city’s health care facilities.

“(Former UN Secretary General) Kofi Annan would not have praised the initiative had he been aware of the facts,” Mr Maken said, referring to praise of the Elders — an Annan-led global body — for the project.

The government has recently announced that 1,000 such clinics would come up in the city in the next four to five months. Around 107 clinics are operational at the moment.

“The AAP will have to face the India Shining impact,” the Congress leader said referring to the BJP’s 2004 poll slogan when it lost.