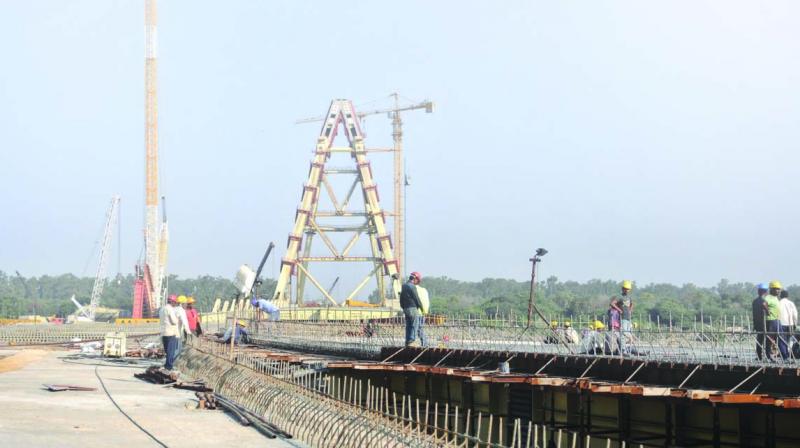 The bow-shaped bridge will stand in the middle of the river.

New Delhi: The much-delayed Signature Bridge over Yamuna will see the light of day in September 2017, according to the Delhi government.

The bridge is coming up near Wazirabad and will provide an essential link between East and North Delhi. The government has already spent Rs 86 crore more than the budgetary allocation.

Repeated delays have shot up the estimated cost of construction. In reply to a question in the Assembly on Tuesday, the government said it has already spent Rs 1,225 crore against the allocated fund of Rs 1,131 crore. As per an estimate, the project may cost nearly Rs 1,600 crore. Notably, the bow-shaped Signature Bridge is being built on the lines of the London Bridge.

The project, often dubbed as the “white elephant” by the current Aam Aadmi Party (AAP) dispensation, was meant to be completed before the 2010 Commonwealth Games in Delhi. The Delhi Tourism and Transport Development Corporation (DTTDC) was entrusted with the responsibility of implementing the much-touted project. As per the latest progress report posted by DTTDC, funds available at present will be exhausted by the month-end. At present, the work pertaining to pylon erection is underway.

Amongst the major hurdles in the completion of the bridge were clearance from the forest department and the late delivery of consignments from China. The Chinese firm involved with the project reportedly lacked the requisite experience for such a project.

Over the last one year, the government has differed the deadline from 2016 year end to April 2017 and now to September 2017. The government said that the project should ideally have been completed within 45 weeks of the awarding of the work.