The Chetna Diwas was attended by political leaders and members of the civil society. 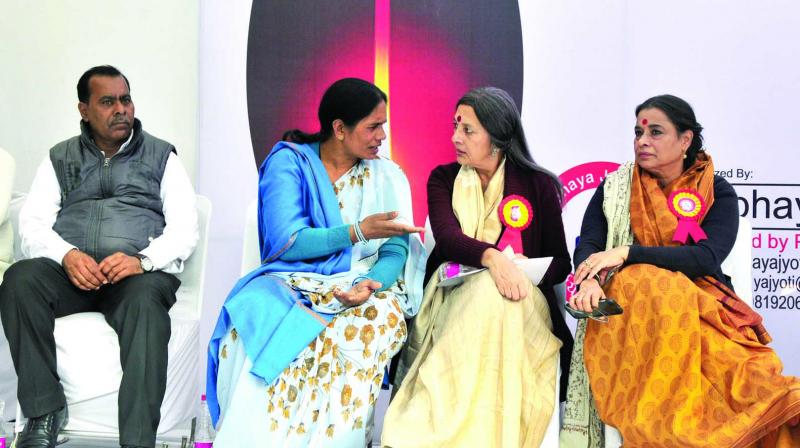 New Delhi: “She lit the flame,” read a poster at Jantar Mantar. Amidst a handful of lit candles, the family of the horrific December 16 gang rape victim still awaits justice. The protest site in the heart of the capital, which saw vociferous agitations four years ago, was numb with the early morning news of a similar incident in the capital.

In a sombre affair, the Nirbhaya Jyoti Trust, established to help women in dealing violence meted out against them, had organised a gathering to commemorate the incident. The Chetna Diwas was attended by political leaders and members of the civil society.

Few hours before the family had planned to assemble, another rape case came to light. “Kahan badla hai kuch. We heard about another case in the morning. Like I said yesterday, news of rape is routine here,” said Nirbhaya’s mother.

“It has been four years today, but till now justice has not been served to her (Nirbhaya). We have been trying a lot from the past four years to ensure that she gets justice. Yet, the accused have not been punished. The case is pending in the Supreme Court, but still we don’t know when she will get justice,” she added.

Jantar Mantar has seen many cold nights with young and old seeking strict laws and change in the ‘psyche’ towards sexual violence. On Friday, a small number of people gathered there to understand why and how these crimes continue blatantly.

“There is a vacuum — legally and socially. Of course, few rudimentary things in administration will keep a check on sexual violence, but what is the long term solution? It’s not like rapes are not rampant in western countries. But, in India there is a stigma attached to it. So, first and foremost, people need to change their ideology about someone who has been raped. The obsession with virginity is what, sort of, dents the life of the survivor,” explained an expatriate, Nuria, who works at the Espanol institute and came to attend the gathering.

Nirbhaya’s family said that the fight for justice is a long one.