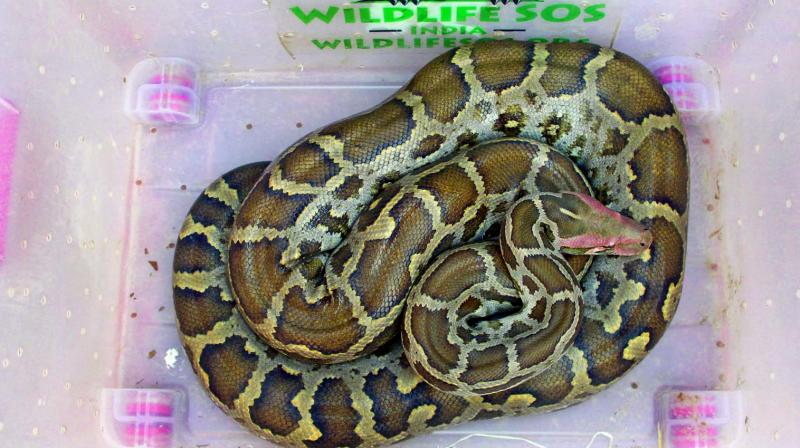 An Indian rock python, nearly four-foot long, was rescued from Tughlaqabad Fort by an NGO after passersby tried to pelt stones at the constrictor.

New Delhi: An Indian rock python, nearly four-foot long, was rescued from Tughlaqabad Fort by an NGO after passersby tried to pelt stones at the constrictor. The python was found to be unhurt and is currently kept under observation.

With the Asola Bhatti Wildlife Sanctuary located just minutes away from its premises, Tughlaqabad Fort is no stranger to the presence of wild visitors. On Saturday night, passersby found the python nestled atop a tree outside the fort and acting on their fears, tried pelting stones at the distressed snake in an attempt to drive it away.

“I was passing by the fort when I saw a large crowd gathered around a tree. I was shocked to see that some people were attempting to pelt stones at the python. So, I immediately contacted the NGO for help,” said Jagat Bahadar, the caller. A team comprising of two experts rushed to the historical site and after ensuring that the crowd maintained a safe distance from the tree, extricated the python from the tree and transferred it to a snake transport carrier.

Kartick Satyanarayan, the co-founder of Wildlife SOS, said: “The Asola Bhatti Wildlife Sanctuary is home to some unique wildlife species such as this python. It is shocking to see such hostility towards an innocent wild animal. With increasing urbanization, deforestation, and construction, and due to shrinking habitats, there has been an increase in the incidents of human-snake conflict. This makes it even more crucial for people to be aware of the serious threats faced by these reptiles and to know harmless ways of mitigating such encounters. Many people, out of their fear or dislike for snakes, end up hurting the reptile who meant no harm.” The python is currently under observation.