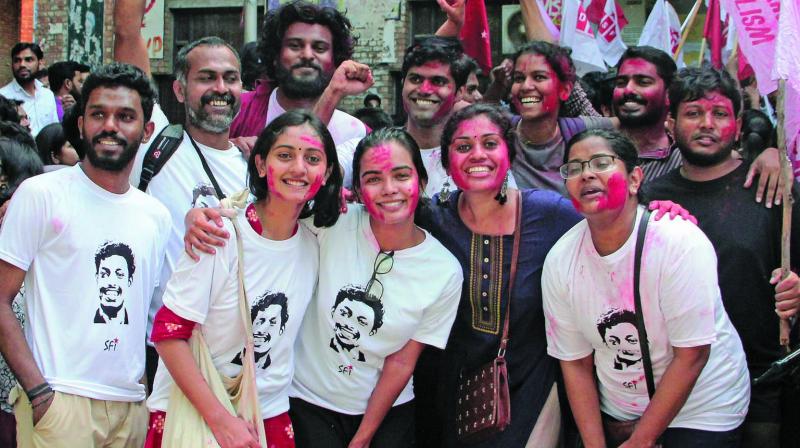 For the post of vice president, Sarika Chaudhary of the DSF garnered 2,692 votes and trounced ABVP candidate Geetasri Boruah by a margin of 1,680 votes.

Aejaj Ahmed of the SFI polled 2,423 votes and won the post of general secretary, by defeating Ganesh Gurjar of the ABVP by 1,300 votes.

Amutha of the AISF defeated ABVP’s Venkat Choubey by 800 votes to win the post of joint secretary. Amutha bagged 2,047 votes. Balaji is a student of School of International Studies. Sarika Chaudhary, Aejaj Ahmed, and Amutha belong to the School of Social Sciences.

There was high drama on Saturday as counting was suspended for close to 14 hours after the ABVP staged protests claiming it was not informed about the start of the counting process.

The counting, which was suspended at 4 am, resumed at 6.30 pm after two teachers from the Grievance Redressal Cell were appointed as observers for the exercise, officials said.

There have also been allegations of a “biased” election committee and violence during the election process.

While the ABVP accused the members of Left outfits of assaulting its members and perpetrating violence and endangering the culture of democracy, the Left group levelled similar allegations against them and also accused them of occupying the counting centre.

CRPF jawans were deployed in the campus area after counting was halted in the morning.

Besides the Left bloc and the Akhil Bharatiya Vidyarthi Parishad (ABVP), there were candidates of the Congress-affiliated NSUI (National Students’ Union of India) and the BAPSA (Birsa Ambedkar Phule Students Association), a student group advocating Dalit causes.

The voter turnout in the keenly contested JNUSU election on Friday was 67.8 per cent, believed to be the highest in six years.