AAP and Congress, while reacting sharply to the video, linked it with ongoing sealing drive by BJP-ruled municipal corporations in the city. 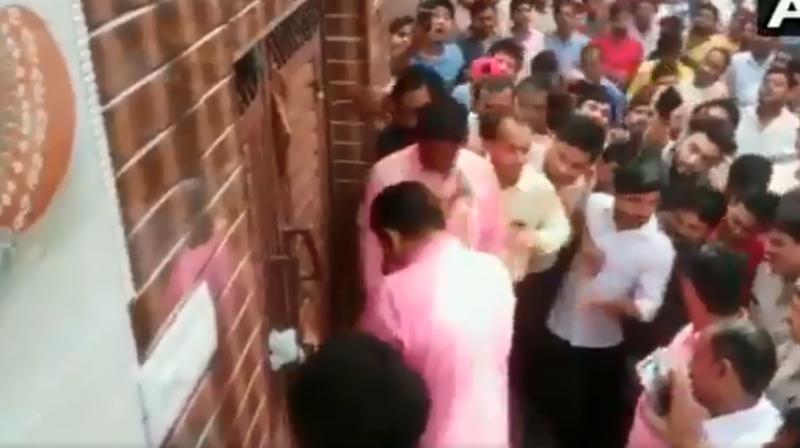 'I broke the seal against pick and choose policy by the corporation. The locals claimed all the houses were illegally constructed but a particular house was singled out for action by the corporation,' Tiwari said. (Photo: Screengrab | ANI)

The Aam Aadmi Party (AAP) and the Congress, while reacting sharply to the video, linked it with the ongoing sealing drive by the BJP-ruled municipal corporations in the city.

AAP convener and Delhi Chief Minister Arvind Kejriwal alleged that after demonetisation and the GST, the sealing now by the BJP has "destroyed" Delhi.

"They conduct sealing in the morning and break the lock in the evening. Do they feel people are fools," Kejriwal tweeted.

Manoj Tiwari told PTI that he was on a visit to Gokalpur where he was informed by locals that only one house among the 1,000 was sealed by the municipal corporation.

"I broke the seal against pick and choose policy by the corporation. The locals claimed all the houses were illegally constructed but a particular house was singled out for action by the corporation," he said.

#WATCH: Delhi BJP President Manoj Tiwari break sealed lock of a house in Gokalpur area of Delhi. He says 'If there are 1000 houses there then why was only one sealed? I oppose this pick and choose system so I broke the sealed lock.' (16.09.2018) pic.twitter.com/hMn6YlP3aG

Tiwari said he "wanted to appeal" to the Supreme Court and its monitoring committee to ensure that no such "pick and choose" action was taken in the name of the sealing drive.

"I will not even spare municipal corporations, even though the BJP rules them, in such matters," he asserted.

He also attacked the Congress and the AAP, saying the problem of sealing was a result of their "failure" to address the issue of unauthorised colonies in the national capital.

Hitting back, Tiwari said the Congress and the AAP never made any sincere efforts to address the issue of unauthorised colonies when they were at the helm of affairs in Delhi.

The Delhi Congress, which is running 'Nyay Yudh' campaign' against "illegal" sealing of household industries in the city, demanded resignation of BJP MPs in Delhi, including Manoj Tiwari, for "failing" to protect the people hit by the sealing drive.

Sharma said the Congress will intensify its campaign against sealing in the coming days.