Over 20 per cent of them were found vulnerable to moderate to severe health issues. 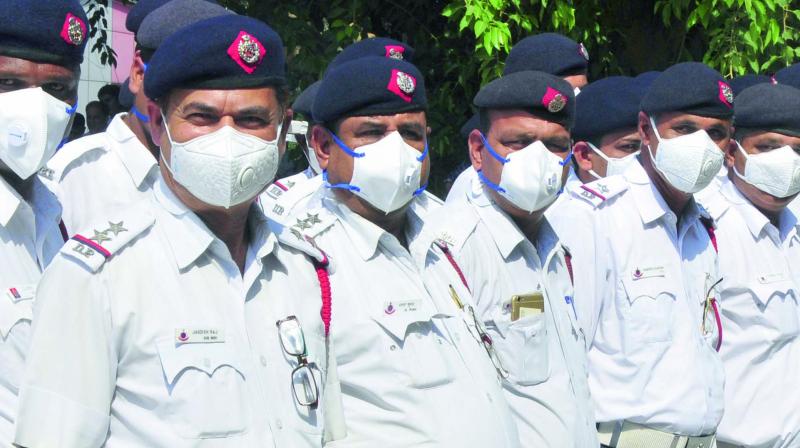 The camp saw a footfall of about 200 traffic policemen, who came out here to get themselves checked out for any kind of ailment so as to maintain good health, which in turn affects the quality of work. (Photo: Bunny Smith)

New Delhi: The erratic work timings and pressure, which goes on for over 10 hours, and the air pollution working as a catalyst often make the Delhi traffic police personnel prone to health problems.

Adding to it, PM 2.5 levels have crossed the severe and above severe mark in Metro cities, including Delhi. This is adversely affecting the health of the traffic cops.

According to a study by BLK Super Specialty Hospital, the unhealthy working conditions combined with the rising air pollution, stress, and changing lifestyle have made the Delhi police personnel vulnerable to health problems.

During a health check-up camp organised by BLK, it was revealed that at least one in five traffic policemen in Delhi were suffering from respiratory problems. Further, orthopaedic and cardiovascular problems were also detected in few of the 200 policemen checked. Over 20 per cent of them were found vulnerable to moderate to severe health issues.

“The camp saw a footfall of about 200 traffic policemen, who came out here to get themselves checked out for any kind of ailment so as to maintain good health, which in turn affects the quality of work.

“The pulmonary function test revealed that nearly 35-40 of the 200 suffered from breathing problems. Lung congestion, asthma, and throat irritation were the common problems detected. We found that mainly they were victims of respiratory problems, high cholesterol, hypertension, and high sugar levels. Some of them suffered joints pains and displayed low bone density owing to their jobs that involve standing for long duration. We have advised them to take medication and go for some other tests for better treatment and care,” said Dr Sandeep Nayar, the director and HOD of BLK Centre for Chest and Respiratory Diseases.

A senior Delhi traffic police official said, “It becomes very hectic for traffic officials as they come to their duty at 7.30 am in the morning and wind up at 10.00 pm, giving more than 12 hours of shift. Further, dealing with the climate and pollution on Delhi roads is not an easy task.”

“Occupational hazards have made our traffic enforcers’ life difficult. With harsh weather conditions, dust, pollution, heat, and cold, they are at a higher risk of developing health problems.

“A large number of policemen were not even aware of their deteriorating health. They were advised to wear good quality pollution masks while performing their duty, do yoga and breathing exercises, and eat healthy food,” added Dr Nayar.

The Delhi traffic police personnel have been advised by doctors to adopt a healthy lifestyle and wear good quality anti-pollution masks while on duty in view of the rising poisonous vehicular emissions.