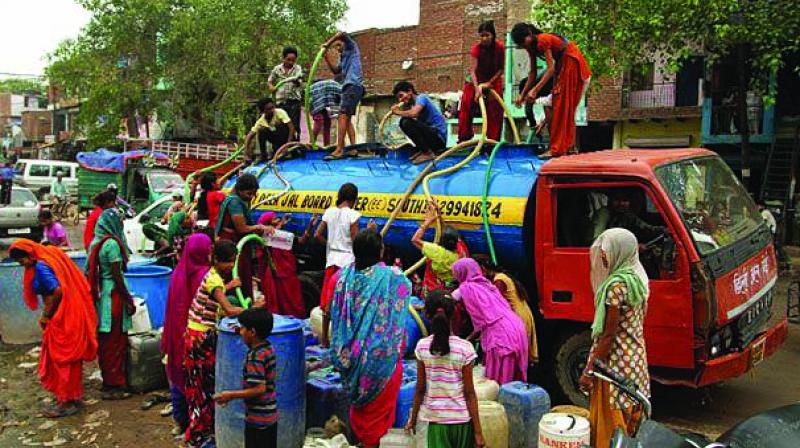 Water supply was severely affected in NDMC areas, including parts of the President’s estate in the evening.

New Delhi: Claiming that the national capital was facing a “water crisis” in the city, the Delhi government on Tuesday said that this could affect areas in Central Delhi, which houses the Prime Minister’s Office, the Rashtrapati Bhawan, residence of several Union ministers, among others. The Delhi government has sought intervention of the PMO to tackle the situation, while accusing the Haryana government of not giving the capital its legal share of water.

Deputy chief minister Manish Sisodia said around 80 MGD of Delhi’s water supply has been stopped by Haryana government, despite court’s order. “I have requested the lieutenant governor to seek the PMO’s intervention to deal with water crisis. This is a political issue and PMO should intervene at the earliest. We should go beyond politics on this issue,” he said.

Mr Sisodia, who is holding the additional charge of water since former minister Kapil Mishra was sacked from the Delhi Cabinet last week, said that chief secretarial talks of both Delhi and Haryana could not reach any conclusion. “I have also told the L-G that there has been a talk on water crisis at the level of officers, but there is still no solution to water crisis. If water shortage continues, we will have to cut down water supply in central areas of Delhi,” he said.

“Delhi water crisis has still not been resolved. Water is being stopped despite court order. I have directed DJB to file contempt petition in high court,” he tweeted.

Delhi’s water requirement is 900 million gallons per day, but it is falling short by about 50 MGD since May 8, according to a senior Delhi Jal Board official. The official said that areas of North and Central Delhi were severely affected by the shortage.

Water supply was severely affected in NDMC areas, including parts of the President’s estate in the evening. The situation arose because production of the Chandrawal water treatment plant was hit.

In the evening, Mr Sisodia held a high-level meeting with the officials of DJB and directed them to take all necessary measures to ensure that the city continues to get its legally obligatory uninterrupted water supply so that no inconvenience is caused to the residents.

Sisodia asked the DJB to keep all its options ready. On Monday, he had directed chief secretary M.M. Kutty to talk to his Haryana counterpart and ensure restoration of full water supply to Delhi.

Water supply has been partially affected in some areas of the city, especially North Delhi, as the Wazirabad treatment plant’s operations have been disrupted. The DJB distributes 900 MGD water in Delhi. Out of this, 543 MGD (almost 60 per cent) comes from Haryana and around 240 MGD from Uttar Pradesh through Upper Ganga Canal.

According to the official, Haryana is bound to send Delhi’s share of water as specified by a Supreme Court.