DCW chairman writes to PM saying just 20 per cent of the Rs 4,000-crore Nirbhaya Fund has been used. 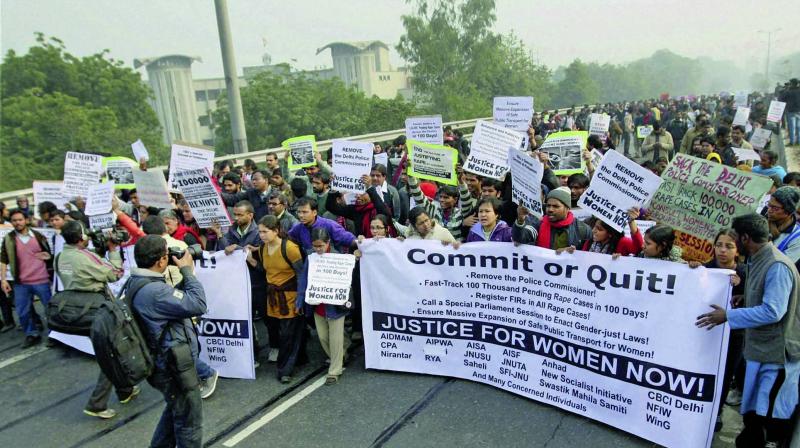 The December 16 gangrape case triggered widespread protests across the country.

New Delhi: The Nirbhaya Fund set up to help women victims for their safety and security in 2012 seemed to have no takers. The fund, which was set up with Rs 1,000 crore has swelled up to Rs 4,000 crore, but reports indicate only 20 per cent of it has so far been utilised.

Raising the issue of the unutilised Nirbhaya Fund, the Delhi Commission for Women (DCW) on Thursday in a letter to the Prime Minister Narendra Modi maintained that

women and children have been caught in the raging turf war between the Centre and the Delhi government. The DCW chairperson Swati Maliwal, in her letter to the Prime Minister stated: “Women and children are suffering because of the ongoing turf-war between the Centre and the Delhi government as nothing was being done for their safety and security.” The Nirbhaya fund was set up after the gruesome gangrape of a 23-year-old female physiotherapy intern in a moving bus.

Claiming that Delhi was “still being referred to as the rape capital of India”, the DCW chairperson pointed out that even after four years of the Nirbhaya incident, women and children in Delhi “are not safe”. There were “incidents of three-year-old girls getting raped.” She further said that in Delhi everyday at least “six girls become Nirbhaya”.

Talking about the Nirbhaya Fund, she pointed out that a Special Task Force, which was set up in 2013 to oversee and allocate the fund “is virtually defunct”.  The Special Task Force comprised a representative from the Centre, Delhi government and the Delhi Police. The letter reminded that the fund was supposed to have been used for digitisation of police records on crime against women, initiate a compensation scheme for the women victims, take measures to prevent human trafficking, install CCTV cameras, set up forensic labora-tories among others. The letter said that till date “nothing much has been done”.

In her letter to the Prime Minister, she claimed that the Delhi government’s assurance to install CCTV cameras in DTC buses have also not been fulfilled. The DCW chairperson urged the Prime Minister to use the fund to set up rehabilitation centres for acid attack victims and one stop centres.