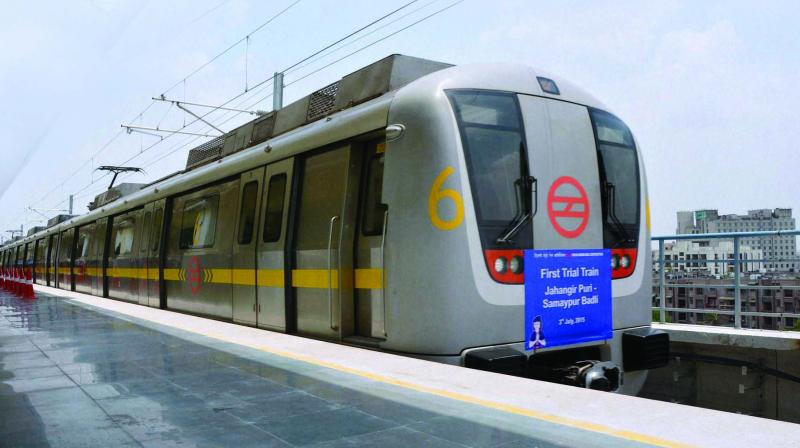 New Delhi: The Najafgarh-Dhansa Bus Stand extension of the Delhi Metro's Grey Line is slated to be inaugurated on September 18, after a delay of over one month due to approach road-related issues.

Passenger services on this section will commence at 5 pm on the same day, Delhi Metro Rail Corporation (DMRC) officials said on Thursday.

The DMRC also tweeted about the new scheduled day of the opening of the corridor.

This extension of the over 4.2-km Grey Line (Dwarka-Najafgarh corridor) will immensely benefit residents of interior areas around Najafgarh.

Union Minister for Housing and Urban Affairs Hardeep Singh Puri and Delhi Chief Minister Arvind Kejriwal will jointly inaugurate the corridor via video-conference link on September 18, the DMRC said in a statement.

Union Minister of State for Housing and Urban Affairs Kaushal Kishore and Delhi Transport Minister Kailash Gahlot will also be present, it said.

This segment was earlier scheduled to be inaugurated on August 6, but it was postponed, two days before the slated date due to issues with an approach road to the station.

Sources in the Delhi transport department had earlier said the condition of the approach road to the Dhansa Bus Stand metro station was "not even accessible to the public" let alone being motorable, a factor that led to the delay.

On May 20, a large portion of the road along with the footpath near the site of construction of the station had caved in due to heavy rains a day before, prompting the city transport minister to order a probe into the incident.

Gahlot, the next day, had inspected the DMRC site at Dhansa Stand Metro Station and Khaira Crossing where the cave-in had occurred.

Sources, quoting Gahlot said, a cave-in had also occured in May 2020, and the DMRC had been submitting different timelines for completion of work and to restore the road for the normal traffic, but the"assured timelines were never met".

The DMRC had then said that a portion of a vital road link connecting Khaira Mor with Gopal Nagar had to be blocked for heavy vehicles due to the construction work on the reversal facility beyond the Dhansa Bus Stand station.

However, following the completion of tunneling work in the reversal area, the road is now being restored and will be ready soon which will facilitate easy access to the station from various interior areas beyond Najafgarh, it said.

The Dwarka-Najafgarh corridor was opened in October 2019, which had connected the urban village area of Najafgarh to the rapid transit network for the first time.

The upcoming Dhansa Bus Stand station has been adorned with attractive artworks and photographs, which display the rich heritage, culture, flora and fauna of this suburban locality of the national capital.

In a first for the DMRC network, the Delhi Metro has built an underground integrated parking facility at Dhansa Bus Stand station that will allow commuters to park their vehicles and move to the concourse area directly, officials had said in July.