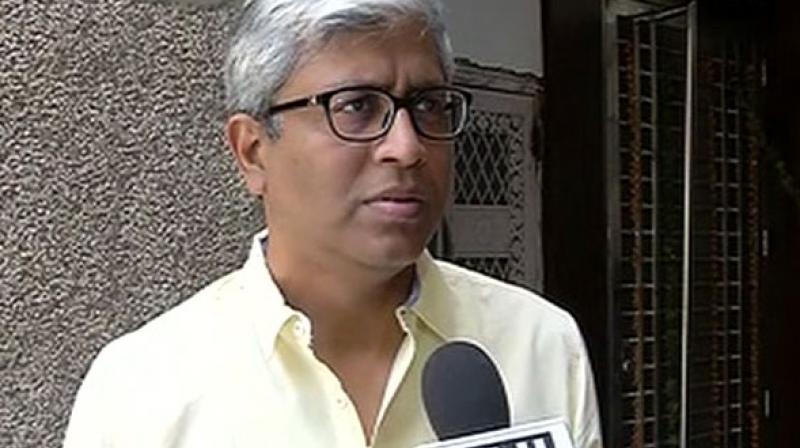 Chief minister Arvind Kejriwal, however, firmly rejected Mr Ashutosh’s resignation and said he will not accept it “in this lifetime”.

Though Mr Kejriwal’s rejection preempted discussions with the AAP leadership to address his reasons, speculations are rife that the journalist-turned-politician has been in talks with the Congress.

“How can we ever accept your resignation? Not in this lifetime,” Mr Kejriwal tweeted, pre-empting the discussion promised by party colleague Gopal Rai. A second tweet said, “Sir, we all love you very much”.

Ashutosh, who left journalism to join AAP in 2014, chose the Independence Day to announce his decision to quit from the primary membership of the party.

“Every journey has an end. My association with AAP which was beautiful/revolutionary has also an end. I have resigned from the PARTY/requested PAC to accept the same. It is purely from a very very personal reason. Thanks to party/all of them who supported me Throughout. Thanks,” he tweeted.

A second tweet read: “To media friends. Please respect my privacy. I won’t be giving any bite of any kind. Please cooperate.”

Ashutosh’s resignation is being interpreted differently with some AAP insiders claiming that he was unhappy over the party’s decision to send a businessman to the Rajya Sabha from Delhi. Others claimed that he was “angry” over being denied a Rajya Sabha ticket by the party.

The convenor of the AAP’s Delhi unit, Gopal Rai, said Ashutosh was not “angry”, adding, “Everyone has the right to take personal decisions.”

Sources close to Ashutosh said that it was not a sudden decision. “It was a long-thought decision,” a source said. The leader had taken a sabbatical for the past three months as he was abroad. He had told the party that he needed some time off to write a book, sources said. The 53-year-old is the author of two books.

Ashutosh had expressed unhappiness over the choice of two of the three nominees to the Rajya Sabha. Once seen as close to Mr Kejriwal, he had mostly kept away from party activities since then.

The party also rushed Deputy Chief Minister Manish Sisodia, labour minister Gopal Rai and AAP spokesperson Dilip Pandey to pacify Ashutosh, but he was not at his residence, sources said. The journalist-turned-politician had joined the party after it first tasted power in December 2013. A known television personality, his joining the party had become a talking point at that time as he had quit as an editor of a noted Hindi news channel.

Ashutosh was the AAP candidate from Delhi’s Chandni Chowk constituency in the 2014 Lok Sabha polls and finished runner-up to BJP’s Harsh Vardhan. For 2019, Pankaj Gupta, a party spokesperson, has been chosen as the ‘prabhari’ of Chandni Chowk and most likely will be the candidate as well.

AAP leader Gopal Rai was the first to respond publicly. A tweet from him read, “Ashutosh’s decision is sad. Will discuss the matter together.”

Senior AAP leader Sanjay Singh tweeted that the party will try to persuade him to withdraw his resignation.

Senior leader and founder member Kumar Vishwas, who had frequent run-ins with Mr Kejriwal, had quit the party days later, protesting that he was being “punished for speaking the truth.”

On Wednesday, with a nod to Independence Day celebrations across the country, Kumar Vishwas quipped, apparently at Ashutosh: “Congratulations on the freedom”.