Kashmiri Pandits: Parties used us as a tool to get votes

There is trust deficit between the political parties be it the BJP, Congress, National Conference or Jammu and Kashmir Peoples Democratic Party. 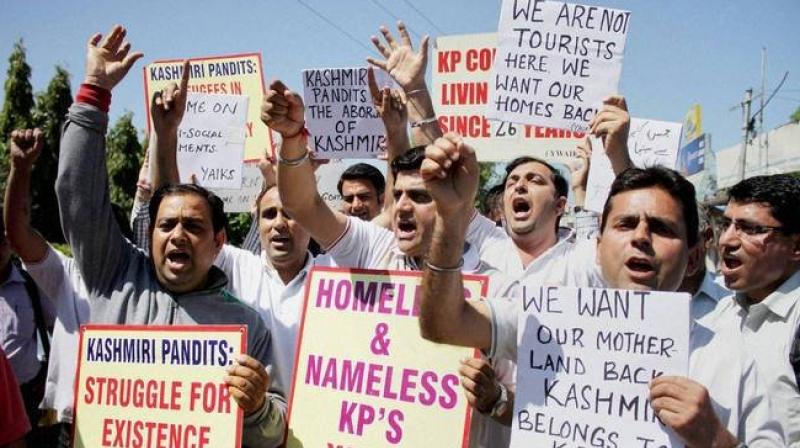 On 19 January 2019, Kashmiri Pandits completed 30 years of their exile and have been living like refugees in their own country. (Photo: PTI/File)

NEW DELHI: Dejected and deprived of their rights, Kashmiri Pandits who have been living in the National Capital Region think that the political parties have used them just as a tool to garner votes and they see the recent crackdown on terrorists and separatists as damage control measures of the ruling BJP. On 19 January 2019, Kashmiri Pandits completed 30 years of their exile and have been living like refugees in their own country.

There is trust deficit between the political parties be it the BJP, Congress, National Conference or Jammu and Kashmir Peoples Democratic Party (JKPDP). “We were forced to leave our home due to Yasin Malik and other separatists who brought their so-called jihad to our doorstep. Now they are acting like saints and talking about the spirit of Kashmiriat, humanity and coexistence. Our nightmare is not over. The present Central government is in a damage control mode as its representatives failed to fulfill their promises, which they made during the 2014 parliamentary election, said Sandeep Kaul, an architect based in Gurugram.

Mr Kaul had seen the horrifying face of terror when he was just a teenager. While taking to this newspaper, he recalls the dark days of Kashmir’s history: “I was in the eighth standard when I saw the rise of militancy in Kashmir. We were a family of five and had had an ancestral home in Srinagar. But all of a sudden, we had to leave our home to save our lives from the militants who were targeting us. Since then, we have been shifting our base from Srinagar to Jammu and then Delhi-NCR. We had to leave our three-storeyed house and stay in rented accommodations for years. My father was even kidnapped once and somehow he managed to escape. The militants attempted to kidnap him again, but luckily, the plan failed.

When asked what Pandits are expecting from the Mr Modi government which has completed almost five years in power, Ashok Manavati, a Kashmir Pandit and an activist in Noida, said, “We will vote on the issue of nationalism. Though the PM Modi’s government has not done anything for Kashmir Pandits, but its recent crackdown on terrorists and separatists especially Yaseen Malik, Farooq Ahmed Dar, alias Bitta Karate, and Hurriyat Conference leaders has shown us a ray of hope.”