The NHRC has observed some common facts pertaining to both the incidents. 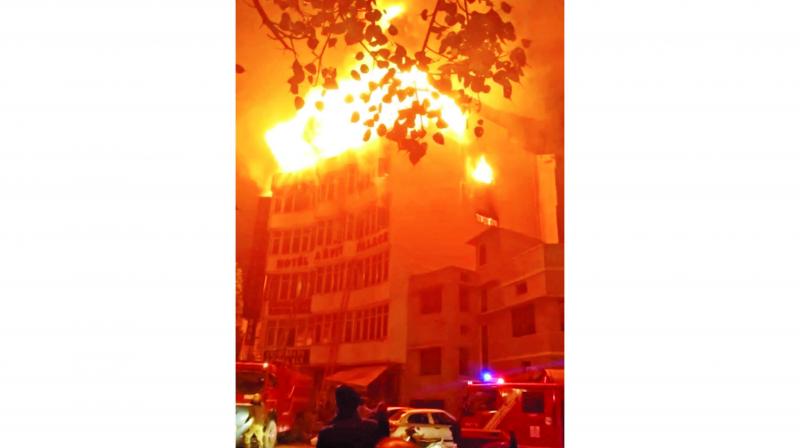 The NHRC has also sought details on action taken against errant officers, and relief and rehabilitation provided to the next of kin of the deceased and injured persons. (Photo: PTI)

NEW DELHI: The National Human Rights Commission (NHRC) has issued notices to the Delhi government, the city police chief and the area’s civic body over the deadly fire incident at a hotel in Karol Bagh in which 17 people were killed, officials said.

“This painful incident could have been avoided if the hotel management and the authorities concerned would have acted sincerely. This is indeed a very serious case of violation of human rights,” the NHRC said.

The rights panel has issued notices to the Delhi chief secretary, city police commissioner and the North Delhi Municipal Corporation (NDMC) seeking a detailed report in the matter, an official said. The NHRC has also sought details on action taken against errant officers, and relief and rehabilitation provided to the next of kin of the deceased and injured persons.

In a statement, the commission said it also “expects from the chief secretary to immediately form a committee of experts to look into the matter relating to violation of norms by the hotel owners, shopkeepers and other individuals or firms who are conducting commercial activities in the residential colonies and encouraging encroachment of public roads with recourse to illegal parking”.

The committee should examine all the issues thoroughly and submit a report along with their suggestions to streamline these areas, making them safe and worth living for the citizens. The response is expected, within six weeks, the NHRC said. The commission is of the opinion that “the authorities have not learnt any lessons from the tragic incidents that occurred in the recent past; no one appears to be bothered about the rules or norms to be followed by the building owners and local residents,” the statement said.

The commission said it has also observed that recently several workers had died at a cloth-ironing workshop in Karol Bagh area of Delhi after a steam boiler had caught fire and the victims got trapped due to cloth piles blocking the entrance. Suo motu cognisance of that tragic incident was taken by the NHRC and a report was sought from the police commissioner and the chief secretary,”which is yet to be received,” the statement said.

The NHRC has observed some common facts pertaining to both the incidents. In both the cases, the victims could not come out of the premises due to blocked fire exit, the rights panel said. “Both the incidents have occurred in the Karol Bagh area which has become highly congested due to commercialisation of buildings in the vicinity, in a reckless manner,” the commission said.

These incidents raise several issues regarding working of the civic authorities in the national capital as well as police authorities, particularly in the Karol Bagh and Paharganj areas, where huge clusters of hotels have come up and they are “often found flouting the prescribed rules” in spite of procurement of fire safety clearance, it said.