The AAP has been vociferously opposing the Metro fare hike and Congress has also joined in the same recently. 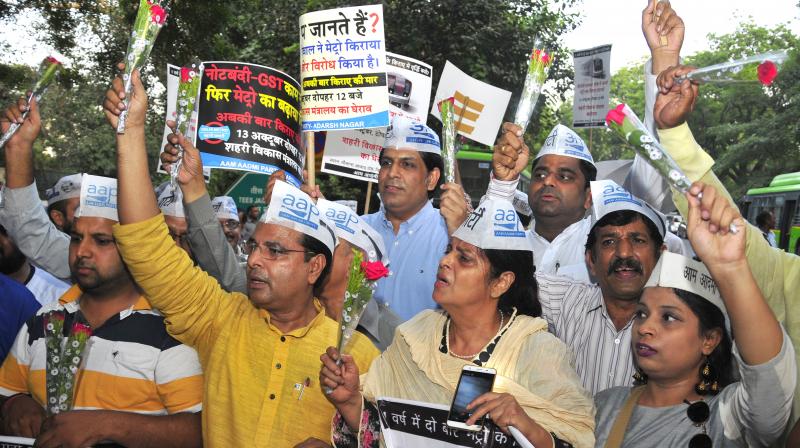 AAP workers protest against the recent increase in the fares of Delhi Metro out the resident of Union minister Harsh Vardhan in New Delhi on Thursday. (Photo: Bunny Smith)

New Delhi: The ruling Aam Aadmi Party’s agitation against the Centre on the recent Metro fare hike is unlikely to reap results as, according to the Delhi Metro Act, the fares can only be reduced if the state government gives subsidy to the consumers or if the public utility launches schemes to alleviate the burden for its consumers.

After the two successive hikes in the Metro fares, the Centre is under pressure — both from the public and the Opposition. Officials said that the Union government does not want to go against the rules to reduce the tariff as it will set a wrong precedent.

The AAP has been vociferously opposing the Metro fare hike and Congress has also joined in the same recently. Despite Delhi Metro Rail Corporation (DMRC) being a joint venture between the Delhi government and the Centre, the political parties have blamed the Union government for the Metro fare hike.

The officials with the urban development ministry said that technically the decision for the Metro fare revision was taken by the independent panel, Fare Fixation Committee (FFC), seven months ago and was approved by the DMRC’s board. However, the Delhi government did not oppose the decision then.

The recent hike in the Delhi Metro fares has blown up into a political issue. While AAP has been opposing the move in the strongest manner possible, Congress has taken up the issue to launch attacks on the Centre. Sources said that the ministry would not be issuing any instruction to DMRC on the hike in fare as it will go against the rules and the Delhi Metro Act.

They added that legally the ministry cannot take the decision to hike the Metro fares and so it is beyond its purview to reduce the fares too. However, they said that the Metro fares can only be reduced in two ways — either the Delhi government provides subsidy or the DMRC can start concessional schemes for the passengers.

Officials said that if the DMRC board agrees, in spite of the fare reduction, concessions can be provided to the commuters. The losses incurred by providing concessions, however, will have to be borne by the city government. This had already been pointed out by urban development minister Hardeep Singh in his letter to Delhi chief minister Arvind Kejriwal.