On the first day of his two days camp with the Delhi BJP, Mr Shah on Friday held a separate meeting with the party’s state functionaries. 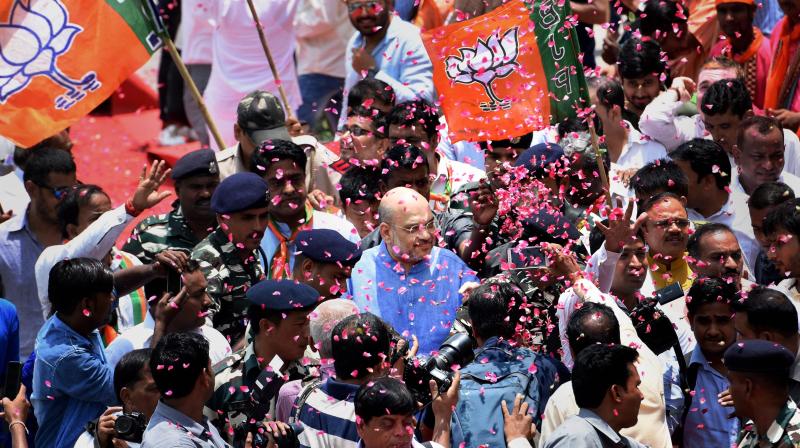 BJP national president Amit Shah being welcomed by party workers at a function in New Delhi on Friday. (Photo: PTI)

New Delhi: While senior Delhi BJP leaders raised their voices against the state office bearers, BJP president Amit Shah pulled up the party state unit for its lax attitude. On the first day of his two days camp with the Delhi BJP, Mr Shah on Friday held a separate meeting with the party’s state functionaries.

Mr Shah also took a jibe at the Congress, saying a party which considered “dynasty” as the quality benchmark for selecting its leader, could never take the country forward.

Addressing party workers, Mr Shah said among all the political parties in the country, only the BJP and the “Communist party” had internal democracy.

In the first meeting, in which state officers, Lok Sabha members from the city and party MLAs were present, several leaders complained about the state leadership. Sources present in the meeting said that former state unit president Satish Upadhyay complained about several office bearers considering themselves as having supreme authority and behaving like ‘God’.

According to a party leader, Mr Upadhyay was talking about complaints of financial mismanagement during the April 23 civic polls and the recently concluded ‘Vistrak’ programme, which turned out to be a flop show for the party.

Lok Sabha member Mahesh Giri complained about the pick and choose policy of the state leadership to accommodate their favourites in the team.

“Mr Giri was referring to changing policies of the party from ticket distribution and thereafter in the state team. He said that first it was announced that spouse were not given, which was not followed. Similarly all those who were elected will be replaced with new face and it was also not followed to reward favourites,” said a party insider, who was also present in the meeting.

Sources said that Mr Shah was reportedly angry with the way the Delhi BJP is functioning. “Controlling his anger, Mr Shah told the party leaders present in the meeting that Ramlal ji ( BJP national general secretary) advised him to control his anger.”