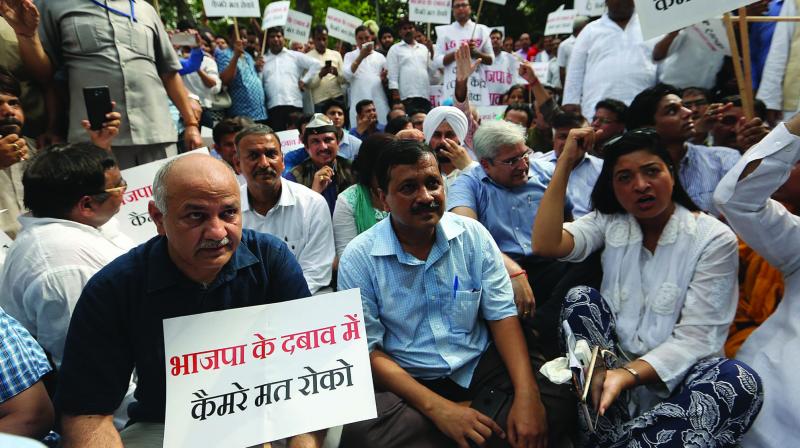 New Delhi: The fight between the AAP government and lieutenant-governor (L-G) Anil Baijal over installing CCTV cameras in Delhi intensified on Monday as chief minister Arvind Kejriwal, his Cabinet ministers, and MLAs sat on a “dharna” for over three hours near the L-G office, asking him “not to stall” the project under “pressure from the BJP”.

Mr Kejriwal and his colleagues sat on dharna after the police officials deployed at the L-G office told the chief minister that he and his ministers can meet Mr Baijal but the AAP legislators will not be allowed to go with them.

The L-G office, however, said that the protest was carried out without any reason and that no proposal on CCTV cameras was sent to Mr Baijal.

“Yet Mr Kejriwal leads a protest misleading the public. The L-G has agreed to meet the chief minister but he preferred to sit on dharna and avoid constructive deliberations,” a statement from Raj Niwas said.

“Cowards bring police forward, but those who are brave believe in dialogue. The L-G’s refusal to meet the MLAs is an insult to the people of Delhi,” added Mr Kejriwal.

The dharna began around 3.30 pm and ended at 6.40 pm with Mr Kejriwal vowing to reach out to the people and to tell them that “BJP and the L-G are disrupting the installation of CCTV cameras in the city.”

The protest near Mr Baijal’s office disrupted the movement of vehicles in the area. A large number of police personnel were deployed at the scene of the protest. Before sitting for the protest, the AAP leaders had taken out a march from Mr Kejriwal’s official residence in Civil Lines area to Mr Baijal’s office.

Mr Kejriwal, his ministerial colleagues including his deputy Manish Sisodia and PWD minister Satyendar Jain, and AAP MLAs, began their march at 3 pm under a heavy police security cover. During the 2 km march, they raised slogans against the L-G and the BJP.

Before the protest, Mr Kejriwal attacked BJP, alleging it does not want CCTV cameras installed in Delhi and hence was stalling the project through the L-G’s office.

In its 2015 election manifesto, AAP had promised to install at least 10 lakh CCTV cameras in the city for the security of women.