Invitations for the swearing-in ceremony have also been sent to BJP’s newly elected eight legislators and the party’s seven sitting local MP’s. 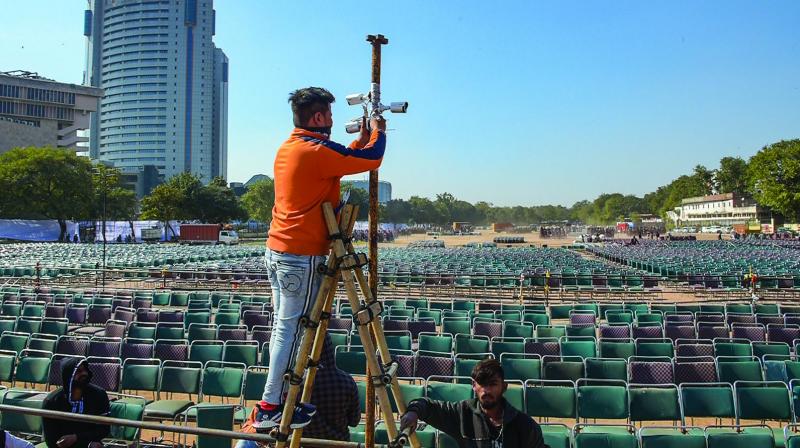 New Delhi: Aam Aadmi Party supremo Arvind Kejriwal has invited Prime Minister Narendra Modi to his swearing-in ceremony on Sunday at the Ramlila Grounds where the former will take oath as Delhi chief minister for the third time. Preparations for the swearing-in ceremony are afoot at the historic Ramlila Maidan which served as the battleground for the 51-year-old bureaucrat-turned-politician during the Anna Hazare-led India Against Corruption movement.

The sprawling Ramlila Maidan, where socialist leader Jayaprakash Narayan had addressed a massive gathering during the “Total Revolution” movement in 1970s, has a capacity of about 1.25 lakh people. In 2013 after the AAP’s first poll victory, Mr Kejriwal’s swearing-in ceremony was held at Ramlila Maidan. In 2015 too, his oath-taking ceremony had taken place at the same venue on the Valentine’s Day on February 14.

Though an invitation has been sent to the Prime Minister, it is, however, not clear whether Mr Modi would attend the swearing-in ceremony as he is travelling to his parliamentary constituency Varanasi on Sunday to inaugurate over 30 projects. Invitations for the swearing-in ceremony have also been sent to BJP’s newly elected eight legislators and the party’s seven sitting local MP’s.

Wishing Kejriwal on his Delhi success, the PM had tweeted: “Congratulations to AAP and Shri @ArvindKejriwal Ji for the victory in the Delhi Assembly Elections. Wishing them the very best in fulfilling the aspirations of the people of Delhi.” Acknowledging the wishes from the PM, Kejriwal tweeted back: “Thank u so much sir. I look forward to working closely wid Centre to make our capital city into a truly world class city.”

The Delhi government, North Delhi Municipal Corporation, which owns Ramlila Maidan, and Public Works Department are working in tandem to make the venue ready for the occasion. Senior AAP leader Gopal Rai will visit the Ramlila Maindan on Saturday to assess the preparations for the event.

Mr Kejriwal has extended invitation to Delhiites to attend his oath-taking ceremony to “bless their son”. “Delhiites, your son is going to take oath of Delhi chief minister for the third time. You must come to bless your son. Sunday, February 16, 10 am, Ramlila Maidan,” Mr Kejriwal tweeted in Hindi.