ubsequently, two IM terrorists were killed and as many arrested. 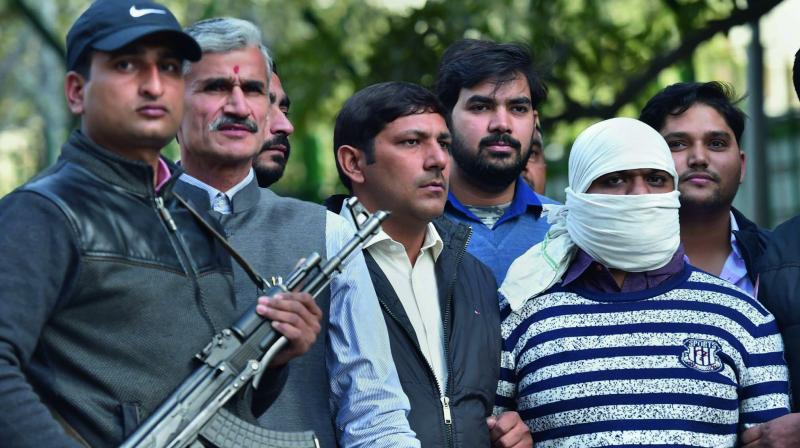 Ariz Khan alias Junaid, one of the most wanted Indian Mujahideen terrorist, being taken to a court by the Delhi police Special Cell after his arrest in New Delhi on Wednesday. (Photo: PTI)

The engineer-turned-terrorist, who was involved in five cases of bomb blast, was at large since the September 2008 Batla House encounter. He was wanted by NIA, Delhi, Gujrat, Rajasthan and UP police.

A native of Uttar Pradesh’s Azamgarh, Khan carried a bounty of `15 lakh on his head by the police. He was wanted by many state police and investigating agencies and even Interpol Red Notice was issued against him for being main conspirator, fund raiser for waging war against country.

An expert bomb maker, conspirator and executioner, Khan was wanted for his involvement in a number of bomb blast cases - 2007 UP blasts, 2008 Jaipur serial blasts, 2008 Delhi serial blasts, 2008 Ahmedabad blasts and he had also escaped from Batla House encounter. He is responsible for deadly terror strikes in which about 165 persons were killed and over 535 were injured. His arrest dents the plan of reviving network of Indian Mujahideen.

The police said that, he was present at Batla House with four others, but had managed to evade the police during the encounter on September 19, 2008 in Delhi’s Jamia Nagar.

Subsequently, two IM terrorists were killed and as many arrested.

According to the police, Special Cell was working on the leads gathered from the interrogation of the earlier arrested terrorists with links to the Indian Mujahideen (IM) and other terrorist outfits, as well as the inputs provided by several secret sources deployed across the country. During the past few months, inputs were received through different sources that absconded terrorists of IM/SIMI have set up their base in Nepal and are frequently visiting India to indoctrinate unemployed youth among their community to fill the void left after the arrest of top leaders of Indian Mujahideen/SIMI. They have been planning the revival of the weak and scattered network of Indian Mujahideen.

A senior police official said that few days ago, an information was received that Ariz will be coming to UP from Banbasa at Indo-Nepal border to meet an associate. A team immediately moved to the area and laid a trap.

Accused Ariz was apprehended on Tuesday evening.  Further investigation and interrogation is still in progress.