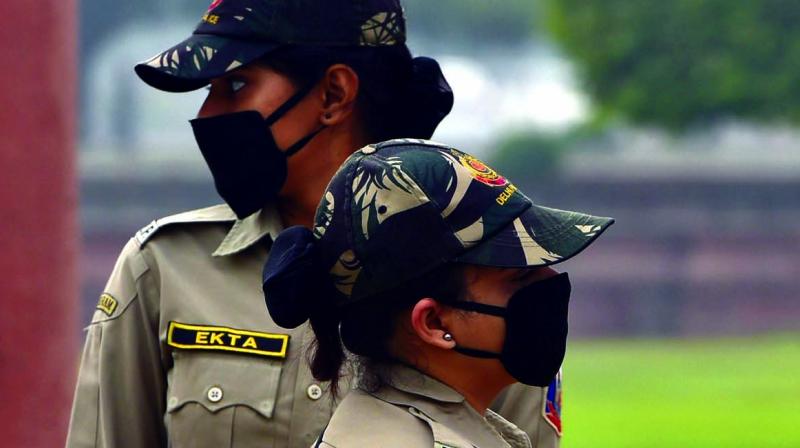 Police personnel wear masks for protection against air pollution in New Delhi on Tuesday. A thick haze engulfed the city on Tuesday as the air quality remained in the “severe” category. (Photo: PTI)

NEW DELHI: The ban on the entry of heavy vehicles into the national capital was lifted on Tuesday, four days after it was imposed due to alarming pollution levels, even as a thick haze engulfed the city with the air quality remaining in the “severe” category with the authorities saying that rains in some parts of the national capital has made the air heavier and increased pollution.

The Supreme Court-appointed Environment Pollution (Prevention and Control) Authority (EPCA) said heavy vehicles would now ply on normal timings between 11 pm and 6 am.

On Monday, EPCA allowed entry of only those vehicles which were stranded for the previous four days at Delhi borders, as it anticipated the situation getting out of hand with the owners of over a 1,000 trucks getting “restive”.

As the overall air quality index (AQI) was recorded at 411, which falls in the “severe” category, according to data by the Central Pollution Control Board (CPCB), the Environment Pollution (Prevention and Control) Authority (EPCA) said heavy vehicles would now ply in the city on normal timings between 11 pm and 6 am.

“After isolated showers in parts of Delhi, lots of moisture is introduced in the air to make it heavy and increased the holding capacity which increased the pollution level,” the Safar said in a report.

It also said stubble burning incidents have reduced significantly and now the winds are not blowing from these areas so its impact on Delhi’s air quality would be marginal.

The restriction on the entry of heavy vehicles was imposed from November 8 to November 11 but was later extended by a day by the Supreme Court-appointed agency on the recommendations of a Central Pollution Control Board-led task force, which reviews the national capital’s air quality.

Over 2,200 vehicles were returned from Delhi’s borders during the four-day restriction — from November 8 to November 12 — on the entry of heavy vehicles in the national capital in the wake of high pollution levels in the city, a senior traffic police official said.