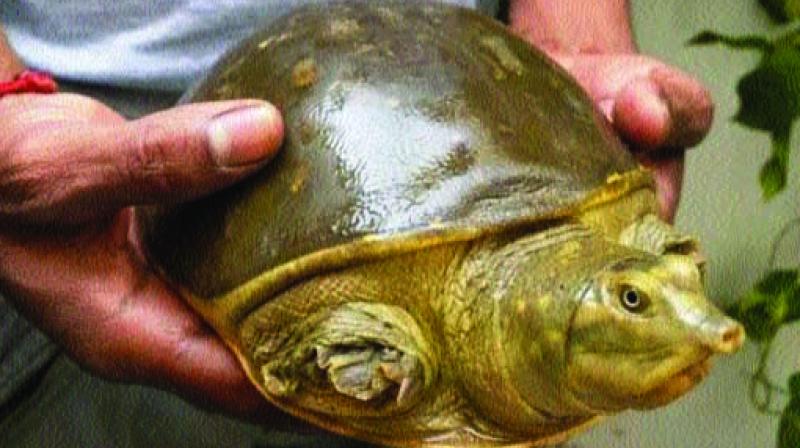 It is listed under Schedule I of the Wildlife Protection Act, 1972 and thereby is granted the same level of protection as the tiger.

New Delhi: In yet another incident involving poaching and illegal possession of wildlife species, an Indian Flapshell turtle was seized from Chirag Enclave here after a man, who was involved in poaching the turtle, left it on the street when he was approached and interrogated by a concerned animal lover.

The turtle is currently under the temporary care of NGO Wildlife SOS. While out for a walk in his neighbourhood park, Gautam Pandey chanced upon a suspicious looking man who was clutching onto what appeared to be a small animal in his hands.

Curious to take a closer look, he approached the man and found that the animal was in fact a flapshell turtle.  Upon being interrogated, the alleged accused fled the scene, leaving the turtle behind, following which Mr Pandey called Wildlife SOS.

The Indian Flapshell Turtle (Lissemys punctata) is a freshwater species found in South Asia. It is listed under Schedule I of the Wildlife Protection Act, 1972 and thereby is granted the same level of protection as the tiger.

Kartick Satyanarayan, co-founder and CEO Wildlife SOS said, "Flap shell turtles are poached extensively for meat, considered a delicacy in some parts of Southeast Asia. The body parts of these reptiles are also sold illegally due to their supposed aphrodisiacal properties and for use in traditional Chinese medicine. It is a commonly misguided belief that turtle shells possess medicinal and healing properties.”

Wasim Akram, manager Wildlife SOS Special Projects said, “Poaching and illicit trafficking of turtles continues to be prevalent in India and Southeast Asia on account of various superstitious myths and beliefs attributed to them. Awareness regarding the illegality of the offense and the abominable treatment of these animals is incredibly important to curb cruelty and poaching of wildlife.”