“Neither the police nor the CBI has taken up the basic probe in this case,” former JNU students’ Union president Akbar Chowdhary said. 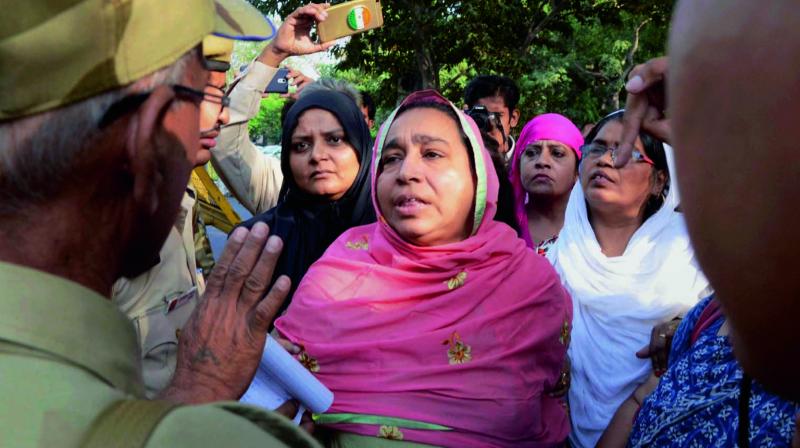 New Delhi: Fatima Nafees, mother of missing JNU student Najeeb Ahmad, on Friday staged a protest outside the CBI headquarters for the second time against the agency’s “inefficiency” in finding her son, five months after the case was transferred to it.

It has been a year since Mr Ahmed went missing on October 15. Ms Fatima, accompanied by relatives and scores of Jawaharlal Nehru University (JNU) students, in a strongly-worded speech told the security personnel to take off their uniforms and join her in the protest.

“You should remove your uniforms and protest with me if you are sensible, as many of you have sons,” she said and warned of a large protest if there was no progress in the case by the next hearing.

“Even if you deploy the entire Delhi police it would not be enough,” she said, adding after the city police, the investigating agency has proven itself “inefficient”.

Najeeb’s mother had on August 9 protested in the same venue after the Delhi high court reprimanded the CBI for placing the same status report submitted earlier.

A large number of personnel of Delhi police, Central Reserve Police Force and Indo-Tibetan Border Police were deployed to control the crowd that was aggressively trying to breach the barricades to enter the investigating agency  headquarters.

“Neither the police nor the CBI has taken up the basic probe in this case,” former JNU students’ Union president Akbar Chowdhary said.

Among those present at the site were Kanhaiya Kumar and Umar Khalid, who said they would continue the protest until a top CBI official gave them an assurance of swift action in the case.