Trees uprooted in many parts of the city, cab firms resort to surge pricing. 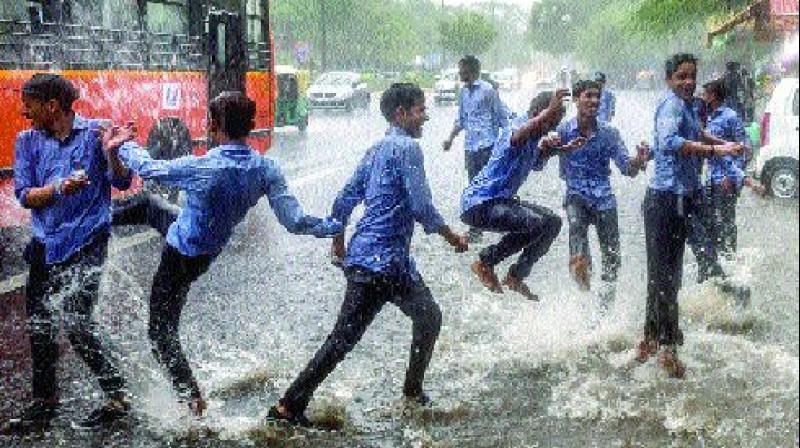 Waterlogging was so severe at Minto Bridge that a bus was almost submerged in the water, the video of which went viral on social media.

New Delhi: Heavy rains wrecked havoc in the city as commuters faced a hard time navigating through waterlogged roads and traffic congestion. The heavy rain also flooded a part of the Delhi Secretariat building after water leaked through the roof. Visuals showed people sidestepping the gushing water as they passed through. Water also poured into the baggage scan machine at the entrance of the building. Waterlogging was so severe at Minto Bridge that a bus was almost submerged in the water, the video of which went viral on social media.

The DTC bus got stuck below the Minto Bridge, a notorious catchment area in the city, as curious onlookers gathered around it. Seven to eight occupants of the low-floor bus, who were stranded, were rescued by the Delhi Fire Service. Minto Bridge is located next to the posh Connaught Place market and the Minto Road underneath is situated at a very low elevation leading to waterlogging there year after year.

The Delhi traffic police kept posting updates about places where there was heavy waterlogging on its Twitter handle.

“Traffic was heavy near Ramlila ground due to heavy rain. Waterlogging was reported on the road between Sultanpur and Ghitorni and under IP flyover. Waterlogging was also reported under Minto Bridge, Sector 1 in Dwarka near Agrasen Hospital, Lawrence Road Industrial area, IGNOU crossing, etc.,” a senior police officer said. Waterlogging was also reported at and around Mayapuri flyover, Naraina flyover towards Mayapuri, Bhairon Marg, Airport Road, Mathura Road, from Delhi Zoo to Sher Shah Suri Road, Moolchand underpass, near Chhatarpur Metro station, Baba Khadak Singh Marg, under Defence Colony flyover, and near Shadipur Metro station. Trees were uprooted near Ashok Vihar traffic signal and near the ILBS Hospital traffic signal in Vasant Vihar. There were reports that cab companies hiked the fares owing to the rain and commuters between Delhi and Gurgaon were affected because of fewer cabs.

Meanwhile, the minimum temperature in the city was recorded at 27.8° Celsius, a notch above the season’s average. According to the MeT department, the humidity level recorded at 8.30 am was 74 per cent.

“Following heavy rain, a total of 57 waterlogging calls have been received at the Delhi traffic police control room from across the city. Civic agencies were simultaneously informed through hotline to pump out water from the affected areas. Six calls related to falling of trees have also been received. Motorists have been advised through the social media tools of the Delhi traffic police to avoid the affected stretches. Around 2,500 traffic police personnel have been deployed to regulate traffic across the city. In addition, all recovery vans were put into service to clear the affected stretches,” said Joint CP (Traffic) Arun Kampani.