Every getaway becomes perfect when this mother-son duo, who believes happiness is all that matters, hit the road. 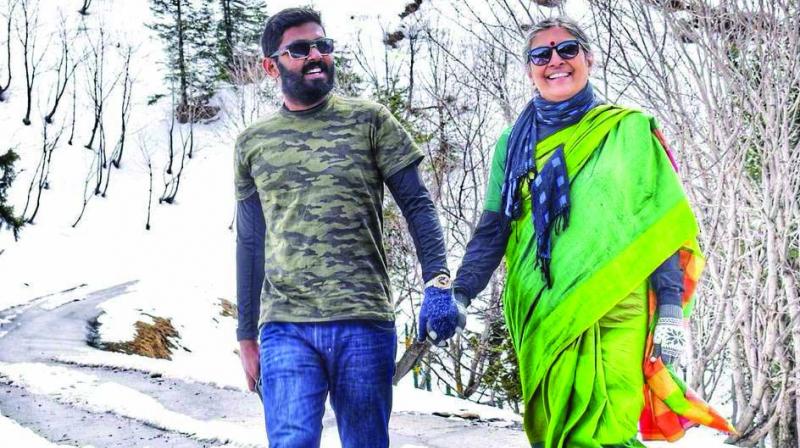 Sarath Krishnan and his mother were walking along a ghat in Kashi, holding hands. It was a calm evening, with hymns reverberating in the background and he closed his eyes, imbibing the mood. When he opened his eyes, it was his room in Thrissur. It took Sarath a few moments to realise that it was a dream.

“That was impossible. I could even recall the scent of the ghat. How can it be a dream,” Sarath recalls the disappointment. And at that moment, he made a decision. Getting out of the bed, he switched on his laptop and booked two air tickets to Varanasi. Walking into the kitchen, he made the announcement, “Amma, I have booked the tickets; let’s go… now!” 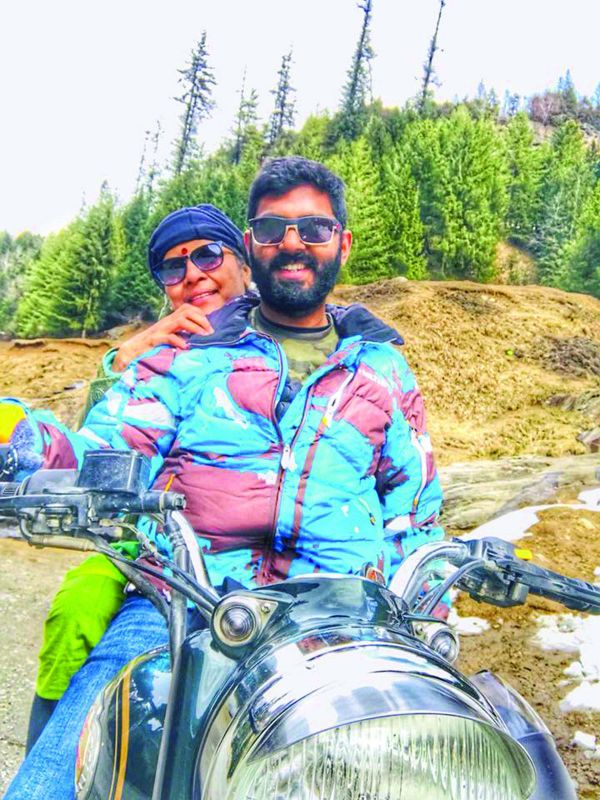 His mother, Geetha Ramachandran, was taken aback. She tried resisting but he was adamant. And in a few hours, they were on their way to Kochi International Airport, carrying a bag with clothes for three days. Recalls Sarath, “We boarded the flight, and by 7 pm, reached Varanasi. After freshening up, we walked along the ghats holding hands, just like in the dream that morning.”

Surprises aren’t new to Geetha; her quirky son always makes on-the-spur decisions and packs up to explore the world, with his mom. For the 30-year-old, any trip with Amma is heavenly. Geetha too loves it. Together, the duo goes on a trip once in almost every three months. “The first journey was to Mumbai from where we went to Nasik, Shirdi, and the Ajanta-Ellora caves. The trip took 11 days,” recalls 60-year-old Geetha, who has since then accompanied her son to Delhi, Amritsar, Wagah border, Tibet, Nepal and the Mt Everest summit! 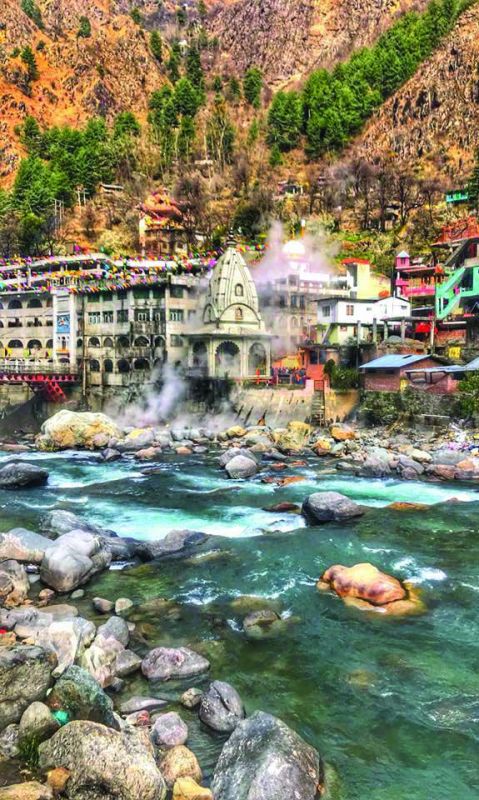 A businessman, Sarath has travelled a lot, both as part of his work and for sightseeing. The very first journeys were to Athirappilly and Peechi dam, bunking school; and then as he grew up, bike rides across India. “The bliss of a scenic sight and new experiences was something I wanted to share with Amma and I asked her if she would come with me. Amma being a spiritual person won’t leave our home, which has temples in the neighbourhood. I had to force her to come with me first. But once we start travelling, she is on a high,” he laughs.

Geetha too laughs, “I didn’t know what I had been missing all these years. I am 60, diabetic and hadn’t hoped to see the world at this age. But now I am extremely happy and keep planning the next journey. My prayer now is to get my life extended by a few more years than destined.” 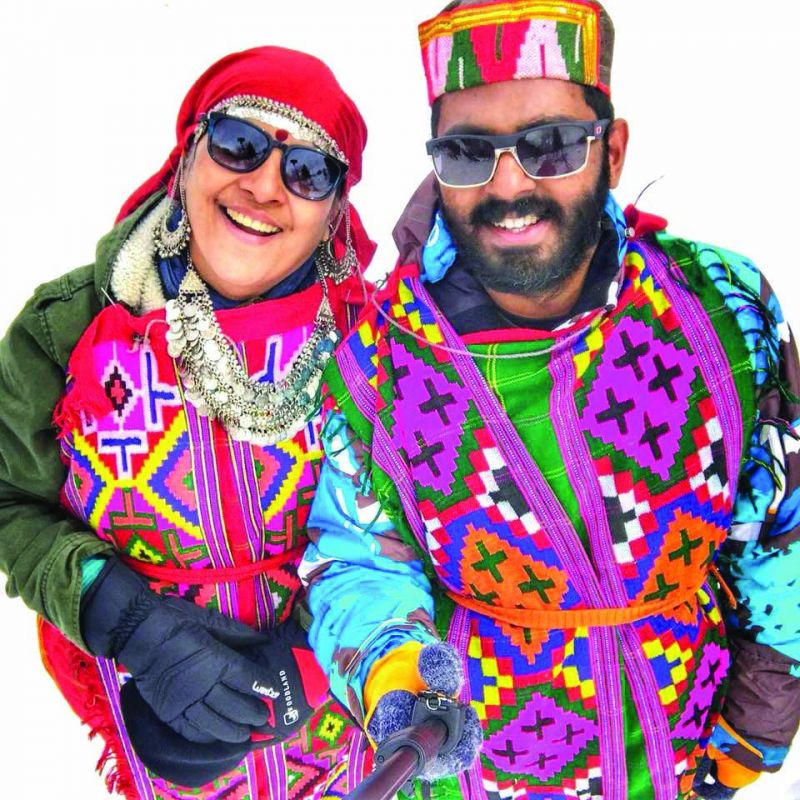 Sarath wants his mother to experience all the happiness in the world. One day, he decided to take her to Mount Kailash in Tibet. “As a devotee of Lord Shiva, that must have been a great experience for her. And there was not much time because one can travel to the Kailash only till 60 years of age. It was her last chance,” says Sarath, who took a flight to Kathmandu, where they spent one day roaming around Nepal’s capital. “The next day, we had to travel to Tibet border, covering 1,500 km by bus. Amma had a sore back and I couldn’t take a risk. We hired a chopper to the border and crossed the bridge in Hilsa to reach Tibet. To reach Kailash, we had to travel for two more days. On the way, we visited the Mansarovar Lake, situated 14,000 m above the sea level, the night view of which is awesome. Starry skies reflecting in the water gave a feel of us being placed inside a globe,” he recalls.

The Kailash trip is unforgettable for the duo. Sarath says he placed a chair in front of the mountain where Geetha watched the giant mountain for hours, lost in thoughts. “Even now, if I close my eyes, I can see the mountains exactly as I had seen back then,” says Geetha.

He even took her to the peak of the Everest by booking an eight-seater plane, which landed at the top of the ranges. “The Everest is a sight none would ever forget. We were astounded. It can’t be explained in words,” says Sarath, who enjoys travelling with his mother far more than his trips with friends.

The mother-son duo’s latest journey was to Varanasi, which was supposed to last three days, but ended on day 11. Says Sarath, “We had planned to take a plane from Delhi and we were aboard the train when we met the ticket examiner, who was a Keralite. He was headed to the last stop – Shimla. Hearing the word Shimla, we looked at each other and smiled.” They decided to take a detour.

“At Shimla, we visited shrines like Manikaran where amid the snow-capped mountains are hot caves where the water keeps boiling at 170 degree Celsius, even in peak winter. The myth is that this is the spot where Lord Shiva meditated,” he says.

The most daring act came after that. The duo decided to ride to Manali on a hired 500 cc Bullet – the son sporting a leather jacket and the mother, a saree! “We took the Rohtang Pass route. It was an ecstatic ride because we could see clouds under our feet. On reaching Manali, I could see my 60-year-old suddenly transformed into an 18-year old! At the sight of snow, she was jumping and running, laughing, playing, etc.,” Sarath recalls.

For him, those happiest moments with his mom make him proud and emotional. “A bike ride with amma, watching her transformation into a happier person — these have been my dream,” he says.

Next on the cards is a trip covering Dwarka, Somnath and Rajasthan.  Happiness is all that matters to the family; so Sarath’s father Premachandran and brother are supportive of their escapades. Being a Sahitya Akademi award-winning traveloguer, who knows better about the ecstasy of travel than Premachandran!