He claimed that the central government does not pay heed to the people’s voices and the party plans to launch a mass agitation. 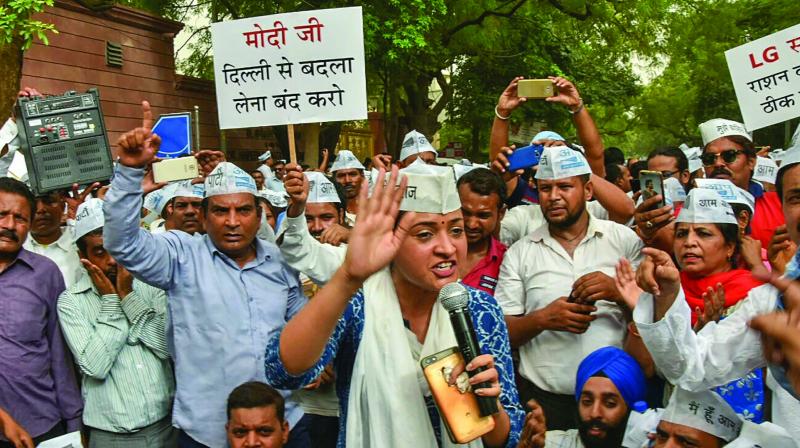 New Delhi: Taking its protest to the streets, the Aam Aadmi Party workers, volunteers along with hordes of people marched from chief minister Arvind Kejriwal’s residence to L-G Anil Baijal’s house on Wednesday.

The party said it would take out a candle light march on Thursday, with adding that if the matter was not sorted by Sunday, its leaders and workers would stage a dharna at the Prime Minister’s Office (PMO).

Senior AAP leader Sanjay Singh warned that the Aam Aadmi Party will resort to a massive agitation if no solution is found to the existing situation.

A mass congregation of charged-up AAP workers and supporters shouted slogans “halla bol” against the Centre and L-G’s apathy towards Delhi and its people, and gathered around 4 pm at the CM’s residence at 6 Flagstaff road. The protesters reached at the L-G house and stayed there in support of to Mr Kejriwal and his cabinet colleagues, who are protesting at the Raj Bhawan for over 72 hours seeking L-G’s intervention to end the IAS strike. All its party leaders, including the MLAs and MPs, have asked the people to join the march. The protesters were heard chanting slogans of “Inqalab Zindabad”, as Yashwant Sinha, former finance minister during NDA, came to address the crowd. Mr Sinha said that neither he, nor the CM was given the permission to meet the L-G and discuss matters.

“If Mr Vajpayee would have been in office, he would have summoned the home minister, Rajnath Singh and seen that the matter got resolved”, Mr Sinha said. He ridiculed Mr Baijal and called him a “ babu” who only answers to the Central government.

Mr Singh attacked the central government saying that the people have assembled to give a stern answer to the dictatorship of L-G and Prime Minister Narendra Modi.

He claimed that the central government does not pay heed to the people’s voices and the party plans to launch a mass agitation. “ It has only happened once or twice after independence that the result of the state government schools has been better than the private ones”, claimed Mr.Singh while drawing attention towards the work done by AAP in its tenure. Continuing his critical tone, he called the CBI a “parrot” and said that they are the agents of the Central Government. He reminded people that owner of this parrot will soon change after the 2019 elections.