BJP takes out march, calls for end to water-power shortage. 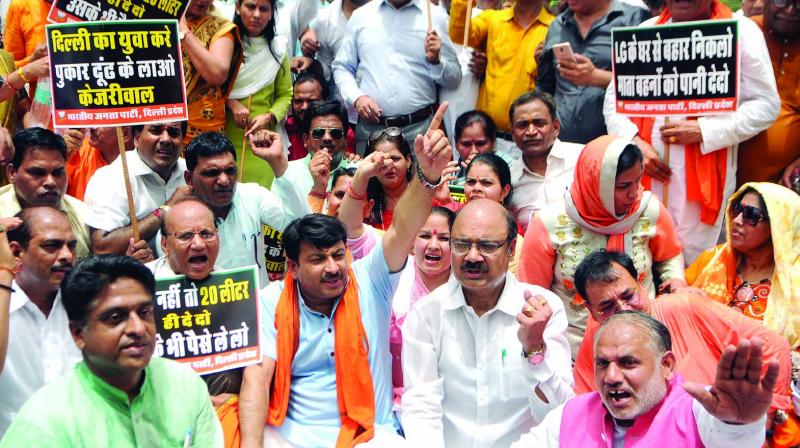 New Delhi: BJP leaders and rebel AAP legislator Kapil Mishra on Wednesday sat on a dharna at Delhi chief minister Arvind Kejriwal’s office against the “non-performance” of his government, mimicking a protest the ruling government members are holding at the lieutenant-governor’s (L-G) office.

Leader of Opposition in Delhi Assembly Vijender Gupta and MLA Manjinder Singh Sirsa said the sit-in will continue till their demands are met by the AAP government. “Until Mr Kejriwal assures to provide water to the people, we will continue our sit-in. The protest is against the “non-performance” of the government,” said Mr Gupta.

Mr Gupta pointed out BJP MLAs had tried to raise the water shortage issue in the Assembly, but were marshalled out. The chief minister does not come to his office, where would people go to raise their problems. “We have called on the people to reach the CM office to raise problem of water supply,” he added. Mr Sirsa said the sit-in will continue until Delhi gets adequate water. BJP MLA Jagdish Pradhan was also present at the sit-in.

Delhi BJP’s civic councilors, led by party president Manoj Tiwari, on Wednesday took out a march from Saheedi Park towards Delhi Secretariat against water and power crisis, apart from break down of development in Delhi due to negligence of Delhi government. The police put up barricades and stalled the march near ITO Chowk.

Lok Sabha member Parvesh Verma and other senior functionaries also joined the march. Mr Tiwari said that Delhiites are facing acute water and power shortage and are disgruntled with the government for failing them on most promises made in his 70-point manifesto. “It is dejecting to see the CM  play his urban naxalite role to divert public attention from his failures to deliver water-power,” Mr Tiwari added.

Delhi BJP general secretary R. Gupta said, “People are paying heavy electricity bills, despite this there are power cuts all across the city daily. “The government is paying subsidy to the private discoms who are playing truant on buying extra power due to increase in the power demand and instead are imposing power cuts.”