In his letter to Modi, Kejriwal cited instances when work was stuck as officers were not meeting with ministers for the past three months. 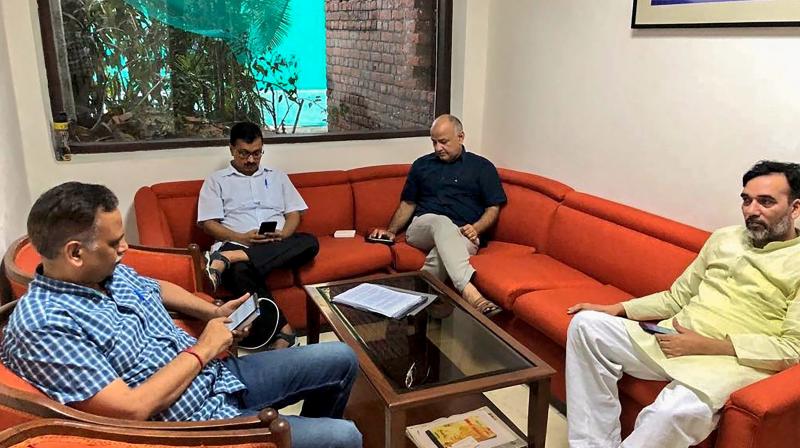 The Delhi CM had earlier said that they will not leave the L-G's office until demands were met. (Photo: PTI/File)

Kejriwal also wrote to Prime Minister Narendra Modi, seeking his intervention to end the IAS officers' "strike" claiming that Lt Governor Anil Baijal was doing "nothing" to break the impasse.

In his letter to Modi, Kejriwal cited instances when the government work was stuck as the officers have not been attending meetings with ministers for the past three months.

He said cleaning of drains before monsoon, setting up of mohalla clinics and measures to curb air pollution, which reached hazardous levels on Thursday in Delhi, are stuck because of the alleged strike by the IAS officers.

The Delhi CM had earlier said that they will not leave the L-G's office until demands were met. The Aam Aadmi Party also plans to hold a candle-light march on Delhi's Rajpath on Thursday evening.

The demands of the protest include bringing an end to the IAS officers strike working in the Delhi administration, action against officers who have struck work for “four months” and approval to his government’s proposal for doorstep delivery of ration to the poor.

On the fourth day at the L-G office, Raj Niwas, security personnel did not let Kejriwal's brother, who came from Pune, to meet him. The CM took to Twitter to express his disappointment.

In the morning, a team of doctors conducted a health check-up of Kejriwal's deputy Manish Sisodia and health Minister Satyendar Jain at the L-G office, who are on indefinite hunger strike to press for their demands.

The Aam Aadmi Party has also threatened to stage a "dharna" at the Prime Minister's Office on Sunday if a solution to the issue was not found this week.

According to the AAP government, officers have not been attending meetings with the ministers and not picking up their calls due to which government work for people was suffering.

However, IAS officers' association has claimed that no officer has been on strike and no work has been affected.

The L-G's office recently slammed Kejriwal's sit-in, saying it was one more "dharna without reason".