However, it had modified its similar order for Gopal Ansal and ordered him to undergo remaining part of the one- year imprisonment. 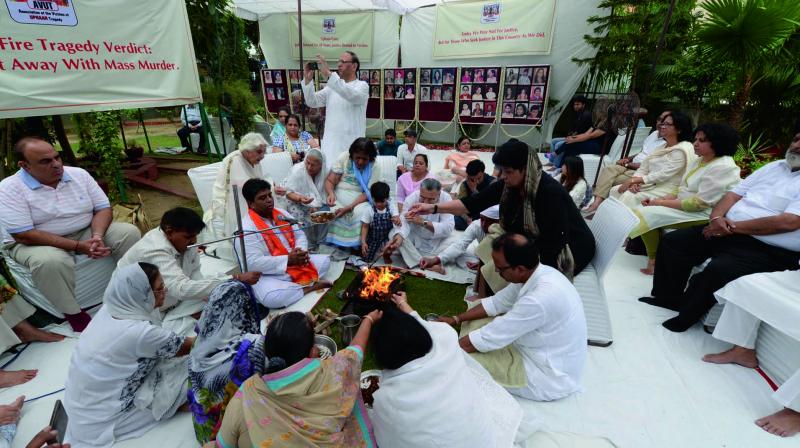 Family members and relatives of victims of the Uphaar fire tragedy take part in special prayers near the cinema hall at Green Park, New Delhi, on Tuesday, the 20th anniversary of the incident. (Photo: Asian Age)

New Delhi: The Union home ministry is examining a mercy petition of realty baron Gopal Ansal, convicted in the Uphaar fire tragedy case, and has sought opinion of the ministries concerned before conveying its decision to the President.

The mercy petition was submitted by senior advocate and member of Parliament Ram Jethmalani to President Pranab Mukherjee, who forwarded it to the Union home ministry for its opinion.

“The mercy petition was received about two weeks ago and the home ministry is examining it. We have also sought views of all ministries concerned,” a home ministry spokesperson said.

On February 9, the Supreme Court had refused to review its earlier order allowing another accused Sushil Ansal to avoid further imprisonment because of his ill-health.

However, it had modified its similar order for Gopal Ansal and ordered him to undergo remaining part of the one- year imprisonment.

Both Ansal brothers were also asked to pay Rs 30 crore each for setting up of a trauma centre in Delhi.

As many as 59 cinema-goers died when a fire broke out at Upahaar cinema hall in South Delhi on June 13, 1997.