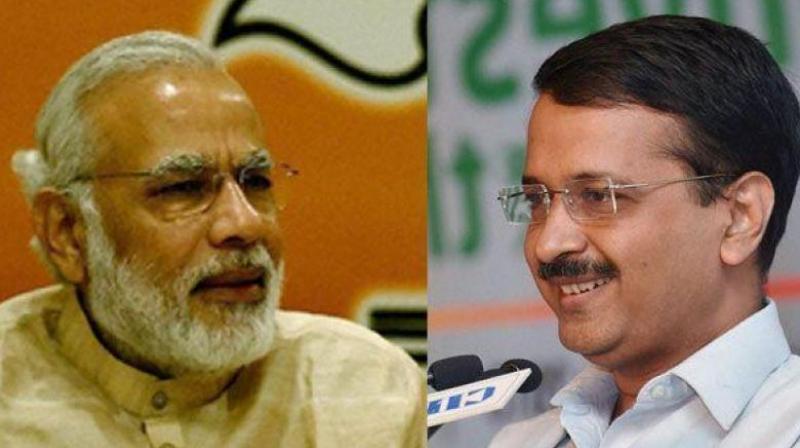 A party leader said the AAP will resort to what it did during the 2015 Delhi Assembly polls-- a "positive campaign". (Photo: PTI)

New Delhi: Stung by its poor performances in Punjab and Goa Assembly polls, the Aam Aadmi Party (AAP) has changed its strategy of directly attacking Prime Minister Narendra Modi ad has decided to focus on "positive campaign" as it faces litmus test in the MCD municipal polls.

A party leader said the AAP will resort to what it did during the 2015 Delhi Assembly polls-- a "positive campaign".

"We are adopting the same strategy used by the party before 2015 assembly polls in which we went to people convincing about the positive work done during our 49-day government.

"We have seen the outcome of a positive campaign in the 2015 Assembly polls and will continue to do that for the MCD polls," said a senior party leader.

Another reason behind not targeting Modi in the MCD polls is the massive victory the BJP scored in Uttar Pradesh and Uttarakhand. Delhi has a sizable voter population that belongs to the two states.

In the recent Assembly election in Punjab, AAP could win 20 of 117 seats, while drew a blank in 40-member Goa Assembly.

During the 2014 Lok Sabha polls, AAP's strategy revolved around attacking Modi. Kejriwal himself unsuccessfully contested against Modi from Varanasi.

The party fared badly in the polls failing to win even a single seat in its home turf in Delhi.

The AAP then changed its strategy during the Assembly polls and focused on the works it it did during its 49-day rule. However, its attack on the BJP continued, with barbs on
Modi. The AAP won 67 out of 70 seats in the Assembly polls.

In its MCD campaign, the party is rarely highlight the two years of tussle between the AAP govt and the Lt Governor and "the Centre not allowing the Delhi government to work".

The thrust remains on subsidies on electricity and water, "internationally acclaimed" mohalla clinics and the "revolution" in the education sector.

In the last fortnight, the party exercised a lot of restraint and did not attack Modi even when Lt Governor Anil Baijal ordered recovery of Rs 97 cr spent on advertisements.

When the PWD department of the Delhi government asked the AAP to vacate its office immediately, all the attack was on the BJP and there wasn't a single word against Modi.
In his rallies too, Kejriwal has been vehemently attacking the BJP, but not Modi.

For instance, during a rally at Matiala in west Delhi and Nangloi in north-west Delhi last week, the CM talked about the Swachh Bharat Abhiyan and BJP-led MCDs' "inability" to deal with problem of sanitation in the city.

"Don't vote for the BJP. They can't even remain true to their Prime Minister," Kejriwal said.

He also referred to the CBI raid on office of his former principal secretary Rajendra Kumar in the Delhi Secretariat and case registered against PWD Minister Satyendar Jain. Againthere was no reference to Modi.

After the raid on Kumar's office in December 2015, Kejriwal had invited criticism for accusing the PM of staging the raid and calling him a "coward" and a "psychopath".

A sample analysis of Kejriwal tweets, who has over 11 million followers second only to Modi, post Punjab and Uttar Pradesh Assembly poll results speaks volumes on this.

From March 4 to 10-- the week leading up to the results on March 11-- Kejriwal tweeted and retweeted 181 tweets.

Of these, 49 had reference to Modi, almost all bashing him, 22 of were attacking the BJP and the RSS while 88 tweets were eulogising the work done by the Delhi government. Rest were general tweets.

From March 11-17, the week after the results, Kejriwal hasn't sent out even one tweet attacking Modi, but his sporadic attack on the BJP remains.

The attack this time was on the Election Commission over alleged tampering of Electronic Voting Machines.

Interestingly, Kejriwal, who is known for using tweets to put his message across, did not tweet for two days during this period.

But will the "restraint" last long? "Every election has a different strategy. Taking Modi head on is an integral part of party's strategy. It may have been altered for this MCD polls, but not for too long," the AAP leader said.