Leopard caught from Delhi released in UP

The animal, which is about three-year-old, was spotted in November, leading the Delhi forest department to set traps to capture it. 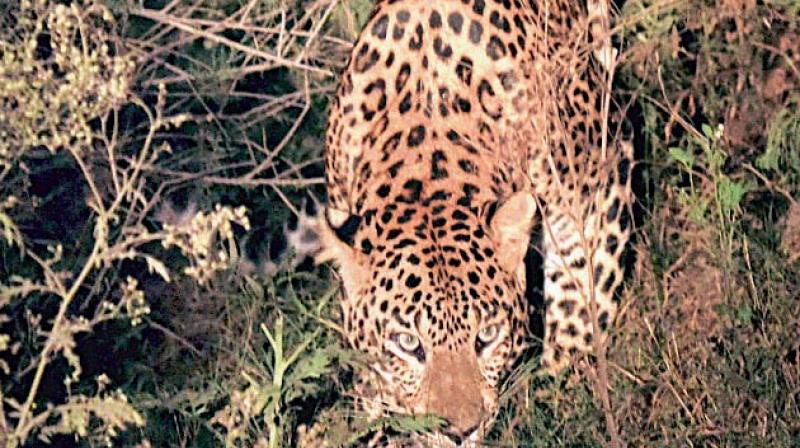 The Delhi forest department set up cameras and cages to catch the wild cat.

New Delhi: A day after a leopard was caught from the fringes of the Yamuna Biodiversity Park in the national capital, the wild cat was on Sunday set free in his natural ecosystem in neighbouring UP’s Shivalik ranges. The animal, which is about three-year-old, was spotted in November, leading the Delhi forest department to set traps to capture it. This was also the first time that a big cat was captured alive in Delhi. Fearing it could attack locals who have illegally cultivated patches of land on the banks of the river, the Delhi forest department set up cameras and cages to catch the wild cat. The leopard had probably strayed from its family either near the Hastinapur Wildlife Sanctuary in UP or the Kalesar National Park in Haryana and made its way to Delhi.

The animal was trapped in the cage in the Phase-I portion  of the 457-acre park. The carnivore was immediately taken to the Delhi Zoo where its health conditions were tested. Reports suggest that there were no external injuries on the animal’s body. When the wild cat was caught, scientists had observed that its belly was flattened as if it had not eaten for a few days. The leopard had wandered into Phase-I of the park, which does not have enough prey base only after it stepped out of the forest area. But Phase-II of the park, where the animal was spotted initially, is an active floodplain where there is ample prey base. In fact, when animal was first spotted, its belly was hanging, which showed that it was well-fed.