The court, however, had granted him bail on a personal and surety bond of Rs 10,000 till August 5, 2019 for appealing against the conviction. 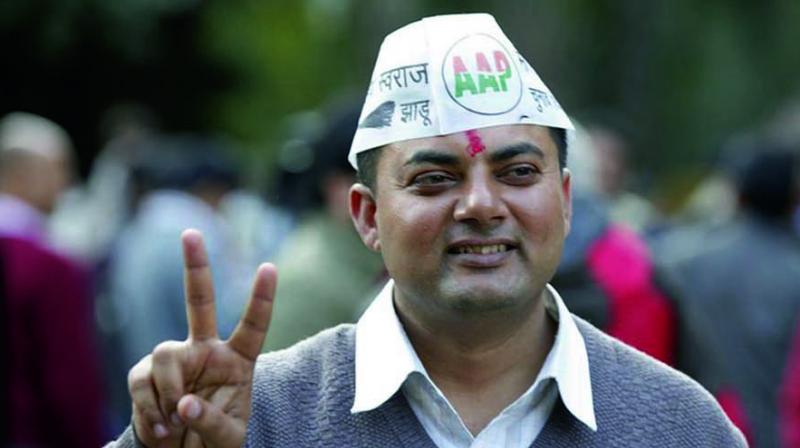 New delhi: A Delhi court on Thursday dismissed AAP MLA Som Dutt’s appeal and sent him to serve a six-month jail term for assaulting a man with a base ball bat during campaigning for 2015 Assembly elections.

Special judge Ajay Kumar Kuhar rejected the application filed by the AAP leader, saying there was no sufficient ground to interfere with the order passed by a magisterial court, his advocate Mohd Irshad said.

Mr Irshad had challenged the magisterial court order, saying the trial court judge erred in holding the politician guilty in the case. Additional chief metropolitan magistrate Samar Vishal had on July 4 given six-month jail term to Dutt and also imposed a penalty of `2 lakh on him, while noting that he was a Member of Legislative Assembly of Delhi before the incident and contesting the upcoming Assembly
elections.

It means he is a public representative and has committed the offence knowing its gravity and consequences, the trial court had said. It noted that the incident did not take place on the spur of the moment but was a premeditated assault by a base ball bat.

The court, however, had granted him bail on a personal and surety bond of `10,000 till August 5, 2019 for appealing against the conviction.

“There is no doubt that on January 10, 2015 at around 8 pm, Som Dutt, along with his 50 supporters assaulted the complainant due to which he suffered grievous injury,” the court said while convicting Dutt.

An FIR was lodged against Dutt in 2015 at the Gulabi Bagh police station in north Delhi on the allegations that he allegedly had hit the complainant in his legs with a baseball bat and his supporters dragged him out on the road and started beating him, causing grievous injury.