At the press conference on Wednesday, an announcement was made of holding the biggest theatre celebration of the world. 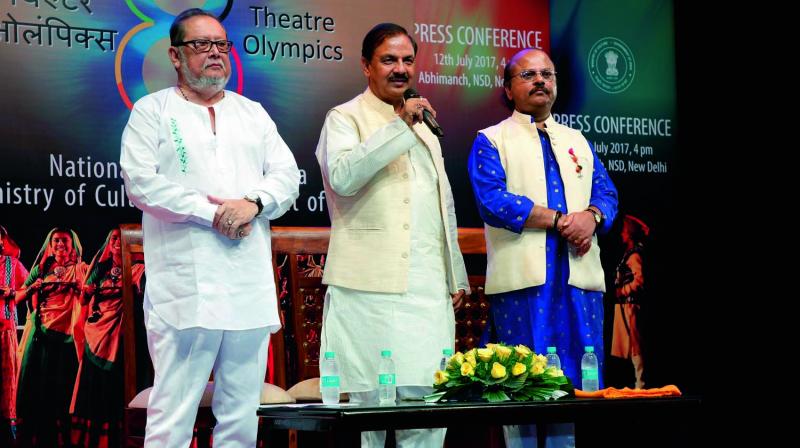 New Delhi: Half naked men, dressed in white dhotis with traditional Indian instruments played a classical beat reminiscent of how kings were welcomed in ancient times. They led the way for some eminent personalities including Hon’ble union minister of state for tourism and culture, Dr. Mahesh Sharma, with chairperson, NSD society Ratan Thiyam and director of NSD, Professor Waman Kendre along with other dignitaries to the stage of Abhimanch auditorium, National School of Drama. “Through the medium of National School of Drama, a new beginning of Theatre Olympia is about to commence in India”, addressed Dr. Mahesh Sharma.

At the press conference on Wednesday, an announcement was made of holding the biggest theatre celebration of the world. After having travelled through Greece, Japan, Russia, Turkey, South Korea, China and Poland, the festival has finally arrived in India.

The eighth edition of the greatest theatre carnival will be held in 2018 from February, 17 till April, 8 simultaneously across 15 Indian cities. Under the aegis of the Ministry of Culture, the chief organiser is National School of Drama. “It is a great feeling of joy and happiness that the Theatre Olympics is taking place in India, a country that is proud of its innovation and heritage. The festival will provide a valuable platform to showcase significant productions of groups from India and abroad”, said Ratan Thiyam. ‘Flag of friendship’ is the theme of the Theatre Olympics. s from across the world. “There is a possibility that 6,20,000 Indain villages will get an opportunity to showcase their talent”, said Dr. Mahesh Sharma. The cities and the required budget is yet to be finalised.