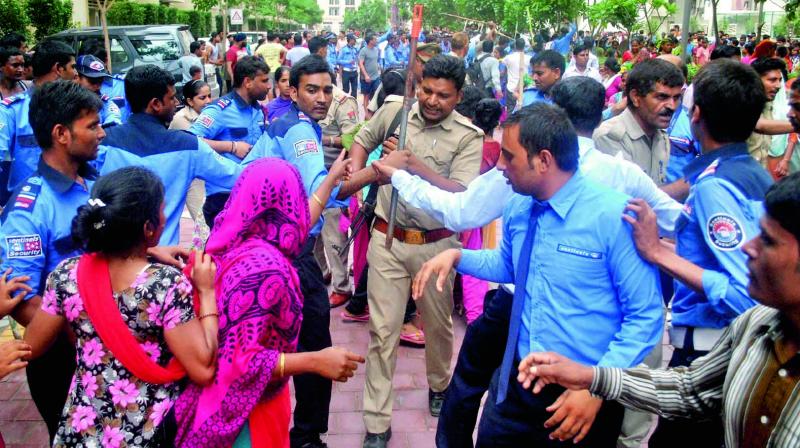 Police and private security personnel clash with domestic helps and local villagers who gathered at a housing society in Noida on Wednesday to protest after a maid was allegedly beaten by her employers on suspicion of theft. (Photo: PTI)

New Delhi: High drama was witnessed at a residential society in Noida on Wednesday as a large number of domestic help went on the rampage and threw stones alleging that a maid working there was held captive and beaten up by her employer, who in turn accused her of theft.

Agitated domestic workers, along with many villagers, pelted stones and broke into a housing society in Noida’s Sector 78 area on Wednesday morning alleging that a domestic help was held captive and beaten up by her employers because they suspected her of stealing Rs 17,000 from the house.

It took three hours for the police to control to the situation at Mahagun Moderne Society in Sector 78 and additional police personnel from other police stations in the district were called in.

Zohra Bibi, 26, employed as a maid, claimed that she was held captive by her employer on suspicion of stealing `17,000 from the house. The owner of the apartment, Mitul Sethi, who lives in the society with his wife and a seven-year-old daughter, had accused Zohra of stealing cash on Tuesday night, the police said.

The maid’s husband, Babu Khan, along with the police, had gone to Sethi’s house on Tuesday night to inquire about Zora, but they were told that she had left, SP (City) Arun Kumar Singh said.

On Wednesday morning, at around 6 am, residents of Mahagun Moderne Society were terrified as around 500 people, armed with sticks and stones, barged into the society hurling stones on cars and damaging property. The mob, mostly relatives and people known to the maid, ransacked the flat of Mr Sethi, a captain in the Merchant Navy, and also the society’s guard room.

Senior superintendent of police Luv Kumar said that they have received separate complaints from the Resident Welfare Association of the society, family members of the maid and the employer of the maid who claimed that their house was ransacked. “A through probe has been ordered in the incident. We are going through the facts in the case. As per the medical report of the maid, no injury marks were found on her body,” said Mr Kumar. The Sethis were escorted out of the housing complex by security guards and have been moved to an undisclosed location with permission from the police. The protests ended after police pacified the crowd and appealed for peace, added Mr Kumar.

Meanwhile, the Delhi Commission for Women on Wednesday claimed that it had received a call seeking help for the domestic help, following which a team was sent help her in registration of an FIR in the case.

DCW chairperson Swati Maliwal said that though the area does not come under their jurisdiction, they could not have ignored the call seeking help.